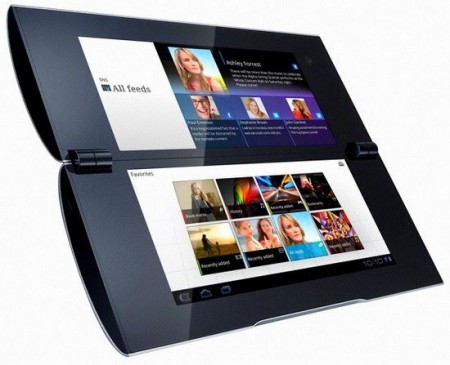 A few weeks ago, the Sony S1 and S2 passed through the FCC with AT&T 3G bands. They’re the first tablets to ship with PlayStation certification, but it looks like only one of them is hitting AT&T for now. It’s the first ever folding, dual-screen Honeycomb tablet, the Sony S2. Today, AT&T officially announced that they will offer this tablet exclusively in the U.S. AT&T didn’t tell us when they are planning to launch it, but Sony did mention that they will bring this device to the market by the fall, so hopefully it will hit AT&T sometime in September. The S2 is running on Android 3.0 and it will be able to connect to AT&T’s HSPA+ 4G network. It will also feature Sony’s PlayStation Network, offering games and video services for users. No word on a price tag for this tablet, but we’ll keep you posted.

So who’s looking forward to picking up a Sony S2 from AT&T? Anyone not impressed with the S1 and/or S2? Sound off in the comments below or on our Facebook Wall! The full press release can be found after the break.

4G Tablet Features Two 5.5 Inch Screens, Android 3.0DALLAS, July 13, 2011 —  AT&T* today announced that AT&T will be the exclusive U.S. mobile broadband provider for the “Sony Tablet” S2 (codename), a dual screen, multi-functional tablet ideal for mobile communication and entertainment, that Sony Corporation plans to launch later this year.“We’re pleased to be working with AT&T on yet another unique mobile device,” said Mike Lucas, senior vice president of Networked Technology and Services Division at Sony Electronics. “AT&T provides the speed and coverage that are integral to the different features and functions of our tablet. We value our relationship as they share our commitment to growing the ‘Sony Tablet’ and the tablet market overall.”

The “Sony Tablet” S2 will be 4G**capable and Wi-Fi compatible. With a qualifying data plan, users of the “Sony Tablet” S2 will have access to AT&T’s mobile broadband network and unlimited access to AT&T’s more than 20,000 hot spots nationwide. With both 4G and Wi-Fi, users can browse the Internet, access digital content including videos, games, and check e-mail, while on the go, nearly anytime.

AT&T will offer monthly data plans for the “Sony Tablet” S2. Distribution and pricing will be announced at launch.