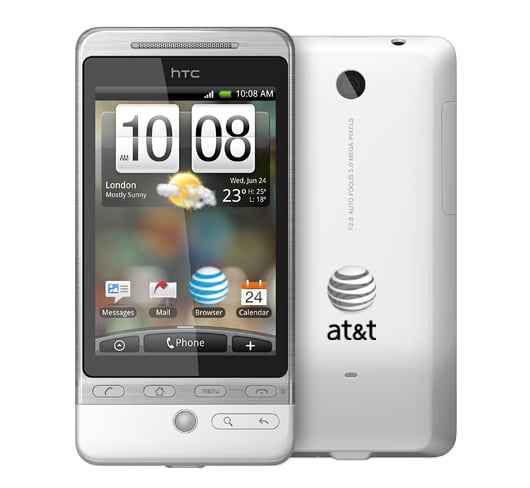 We know that AT&T is planning to release a plethora of Android devices this year. What we don’t know is which ones they are. Rumors have it that a Touch Pro 2 like device will be on the menu. But what’s AT&T got planned for the touch-screen-only crowd?

AndroidGuys has been sent a chat transcript from our buddy Jim C. In it, an AT&T customer support representative has claimed that AT&T will begin carrying the HTC Hero this summer, along with another device, which is still under wraps.

Ingrid: Welcome to AT&T online Sales support.  How may I assist you with placing your order today?
Jim: Do you carry the HTC Pure new anymore? All I see is refurbished, there isn’t even a page for the new device.
Ingrid: I will be happy to assist.
Ingrid: HTC is coming out with new phones pretty soon.
Jim: Will they be similar to the Pure?
Ingrid: Better since they will have Android technology.
Jim: Wow, that sounds great. Do you know if they will be touchscreen like the Pure, or have a keyboard?
Ingrid: Touch screen.
Jim: When might I expect to be able to get one? I’m looking to buy soon, but I could wait a few weeks
Ingrid: Anytime now or summer.
Jim: Sounds great. Thanks for the heads up. I just did a quick web search, would this happen to be one of the devices? http://pocketnow.com/tech-news/att-htc-pc70110-is-the-android-touch-pro2
Ingrid: The Hero is one of them the second one we do not have official word yet.
Jim: Would it possibly be the Legend or the Desire? I’m a little confused about the Hero, since that’s an older device, the Legend is basically the successor to it. So might they be the Legend and Desire?
Ingrid: Maybe if you type upcoming phones to AT&T you may get additional information.
Jim: So you cannot confirm if either the Legend or Desire are one of these devices?
Ingrid: Not yet since we do not have official Information, we are getting a new iPhone by June.
Jim: Just wondering do you know the date on that?
Ingrid: By the end of June.
Jim: Thanks
Jim: Have a great day

While it seems highly unlikely that AT&T would adopt a year old phone, stranger things have happened. There’s always the possibility that the representative was, in fact, referring to the HTC Legend, but was just misinformed. At least now we know to expect two devices in the coming months. That’s good news for AT&T subscribers… Or is it? Should these new devices be locked down and Yahoo-ified like the Backflip, you can bet your bottom that Android fans aren’t gonna be happy.