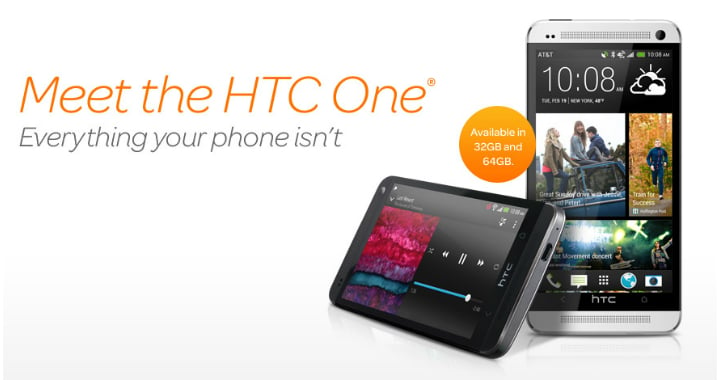 AT&T confirmed today that the HTC One will be offered starting from April 19 with pre-orders kicking off in but a couple of days (April 4). Priced at $199, the 32GB model comes in black and silver while a 64GB exclusive model runs $299.99. Of course, these prices require two -year service agreements.

AT&T, for its part, is also tossing in a free HTC Media Link HD wireless HDMI adaptor so you can wirelessly share content from your phone to your HD television

As a reminder, those of you who want to save on the HTC One can trade-in your old smartphone and scoop up at least $100 for the effort.

Customers eager to reserve their HTC One will be able to pre-order athttp://www.att.com/htcone on April 4 starting at 1:00 p.m. CT. Only AT&T offers a free** HTC Media Link HD wireless HDMI adaptor*** (a $90 value), which lets you wirelessly share content from your phone to your HD television.

HTC One is available in black and silver and boasts a powerful 1.7 GHz quad-core processor, and zero-gap aluminum unibody with a 4.7-inch full HD (1080p) screen and HTC Sense® innovations, to re-shape your smartphone experience.

Setting up your new HTC One is a snap with AT&T Ready2Go, a free service that helps you to easily set up and personalize your device in minutes from the comfort of your personal computer. With Ready2Go, it’s easy to set up your email accounts, import your contacts, connect to your social networks and more.