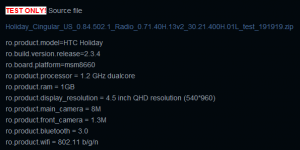 When we learned back in January that AT&T was committed to more than twelve Android devices this year, we were skeptical.  With a track record of Android that included the Flipside, Flipout, BackFlip, and Dell Aero, you can understand our trepidation to get excited.  We’d rather have six awesome devices instead of twelve average or underwhelming products.  But, as it is becoming increasingly obvious, AT&T is very serious about their Android ambitions.  Take the forthcoming HTC Holiday for example.  Depending on how soon it arrives, they may have the biggest and baddest Android phone on the market.

The 911Sniper blog has posted what should end up as official specifications for the high-end HTC phone and they are drool-worthy.  As it stands, the Holiday will feature a 4.5-inch qHD screen at 960×540 resolution, a 1.2GHz dual-core Snapdragon processor, and 1GB RAM.  Toss in the latest version of Android (2.3.4), an 8-megapixel camera, and a front-facing 1.3-megapixel camera and you have winner.  Now, let’s keep that price at or around the $200 mark, okay?

If you are wondering what the Holiday might look like, check out the image from Pocketnow below. 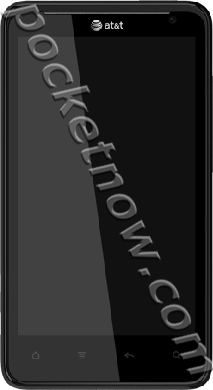