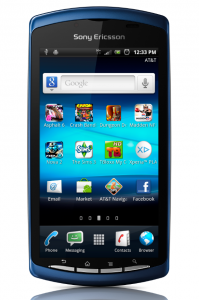 AT&T is set to finally offer the Sony Ericsson XPERIA Play later this month, putting the phone on sale at $49.99 with two-year service agreements.  Tapping their iteration with a subtle name change, Ma Bell has decided that XPERIA Play 4G is a more moniker.  Like its Verizon counterpart the phone runs Android 2.3.3 Gingerbread and features a 4-inch display, 1GHz processor, 5-megapixel camera, and VGA forward-facing camera.  About that 4G suffix, it’s only AT&T’s HSPA+ network and not the 4G LTE stuff we’d rather see.  Nonetheless, the $50 price point should help move a few of these stealth blue “PlayStation Phones”.

The Xperia PLAY 4G has access to more than 150 games optimized for the special hardware and comes with a number of pre-loaded titles (Dungeon Defenders, Asphalt 6 Adrenaline, Star Battalion, Madden NFL 11, The Sims 3, Tower Bloxx: My City, and Crash Bandicoot).

Only AT&T customers can choose the 4G-capable Xperia PLAY, offered in an exclusive “stealth blue” color.  The smartphone package is complete with bonus accessories including the Sony Ericsson Multimedia Dock DK300 and MC100 music cable. In addition to providing a convenient charging station, the DK300 converts the Xperia PLAY’s screen to a large clock display, and the music cable lets you connect to external speakers.** The DK300 and music cable come in the Xperia PLAY box, only from AT&T.

In addition, the device is pre-loaded with seven games, some of which are exclusive, at no additional cost including:

AT&T customers will have access to more than 150 Xperia PLAY optimized games including Minecraft™ Pocket Edition, Battlefield: Bad Company™ 2 and Dead Space™ 2 for download and purchase through the “Get Games” recommender screen, easily accessible when you slide open the Xperia PLAY’s game controller.

The Xperia PLAY 4G offers a gamer’s wonderland by providing the on-the-go capabilities of an Android smartphone with the immersive entertainment appeal of a portable gaming device.

Along with the great gaming and Android capabilities, the Xperia PLAY 4G from AT&T includes Facebook Inside Xperia, a suite of Facebook functions integrated into various applications, such as friends’ birthdays in the phonebook, a “like” button in the music player, photo tags in the media gallery, and YouTube video recommendations from friends.

The Xperia PLAY 4G arrives in AT&T stores and online on Sept. 18 and will be available for $49.99 after a two-year contract with minimum data plan.

“Gamers and smartphone fans alike will delight in the Xperia PLAY 4G’s instant access to gaming and entertainment,” said Jeff Bradley, senior vice president, Devices, AT&T Mobility and Consumer Markets.  “We’re excited to offer a device that allows consumers to have fun while still staying on top of everything in their life.”

“Our fans on AT&T have been asking for Xperia PLAY and now we’re giving them everything they need in a smartphone with what they really want – an immersive gaming experience on AT&T’s 4G Network,” said Peter Farmer, Head of Marketing for North America, Sony Ericsson.  “In addition to a constantly growing list of games exclusive to and optimized for Xperia PLAY, we know AT&T customers are really going to enjoy the uniquely Sony Ericsson social experience, including Timescape and Facebook Inside.”