Remember how AT&T indicated that they would begin cracking down on smartphone users who chew through a bunch of data each month?  At the time, we learned that it would only be those naughty, top 5% of heavy users who would get put on the bad list and/or have their speeds slowed down.  Well, according to new details, you may end up getting a notification from AT&T at just over 2GB of data.

A post on Wall Street Journal from today advises that their own Willa Plank received the letter from AT&T indicating they were in the top 5$ of users.  After averaging around 1.76GB of data in 2011, Plank exceeded 2.05GB with about one week to go in the billing cycle. Apparently this means that they are using approximately 12X as much data as the average user.  As if the letter notification wasn’t enough, AT&T also followed up with a text message advising that Plank connects to as much Wi-Fi as possible in order to avoid slowed data. 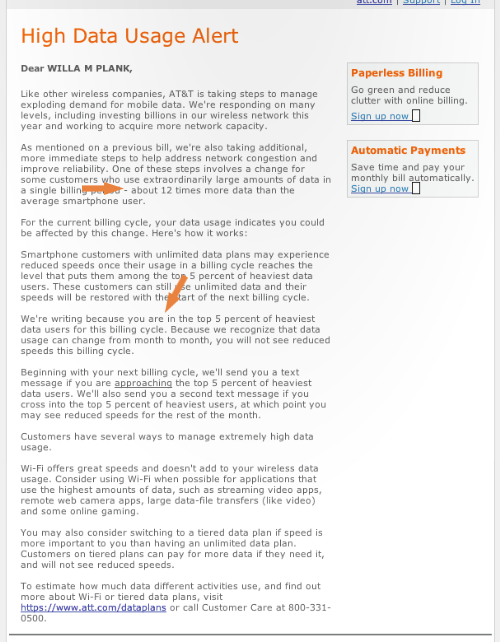 Have any of you received the AT&T letter yet?  What kind of data were you using to merit the notification?  How did you adjust your usage?  Or did you?