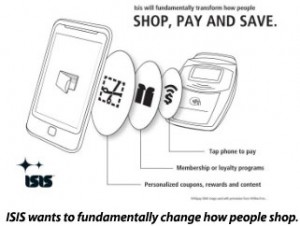 Who watched Eric Schmidt yesterday as he waved around that unreleased phone? Yeah, it was running Gingerbread, but more importantly, it had NFC technology built in, and was demoed as that conference. He just swiped the phone over a pad that had a chip embedded in it, and everything started to make noise and do stuff. Schmidt continued to talk about the financial implication of using such a technology for payment, but that kind of infrastructure would probably take a long time to embed into our world, right? Yes, but that doesn’t mean we shouldn’t do it. Fortunately, I’m not alone at all. Three of the four largest carriers in the US have teamed up to help bring this “future scape” into the present with ISIS.

I say “future scape” like that because several other countries have had this ability for some time. You walk up to a soda machine in Japan and swipe your phone across the pad, and the soda drops out. Transaction complete. That financial step is now coming to the US and is being backed by some pretty big guys. The CEO of ISIS, Michael Abbott, is starting this push by working with the mobile giants, and hoping that it will grow exponentially from there.

“While mobile payments will be at the core of our offering, it is only the start. We plan to create a mobile wallet that ultimately eliminates the need for consumers to carry cash, credit and debit cards, reward cards, coupons, tickets and transit passes,”

This make a lot of sense for me. After all, I already have my phone in my hand the majority of the time anyway, what could be more simplifying then not needing to grab for the wallet when paying for a cab, or walking by T-Mobile and just swiping my phone to pay the bill? Paying for things isn’t the only benefit, either. Shopping games like SCVNGR or Groupon could become infinitely more aggressive in the grassroots, crowd-sourced style advertising that goes alongside this kind of purchasing. Data can be stored in many ways, too. Those annoying grocery store rewards cards? I’ve got my phone now, so no need to clutter up my key chain with your flimsy plastic bar-codes. This kind of tech could start a whole new trend in purchasing and playing, one that could change the very nature of the economy itself.