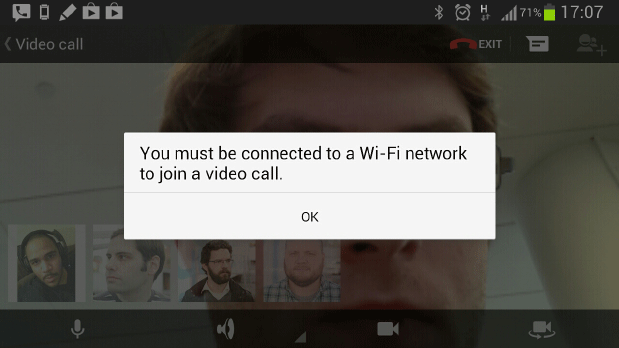 If you’ve checked out the new Hangouts app on AT&T, chances are you’re pretty familiar with the message stating “You must be connected to a Wi-Fi network to join a video call”. Heck, you’re even used to it if you’ve tried to use FaceTime over their cellular data network.

According to AT&T at first, the issue with Hangouts was to be blamed on Google. According to them, since the app replaced a native Android app (Talk), then it was up to Google to make it work. Now, however, AT&T has come out to say that all their video chat apps will work over mobile data by the end of the year. In a statement, AT&T said:

For video chat apps that come pre-loaded on devices, we currently give all OS and device makers the ability for those apps to work over cellular for our customers who are on Mobile Share or Tiered plans. Apple, Samsung and Blackberry have chosen to enable this for their pre-loaded video chat apps. And by mid-June, we’ll have enabled those apps over cellular for our unlimited plan customers who have LTE devices from those three manufacturers.

Throughout the second half of this year, we plan to enable pre-loaded video chat apps over cellular for all our customers, regardless of data plan or device; that work is expected to be complete by yearend.

Today, all of our customers can use any mobile video chat app that they download from the Internet, such as Skype.

Be sure to let us know your thoughts below.