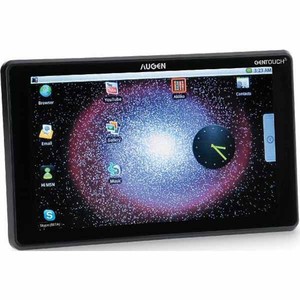 You may remember our post last month about the Augen tablet being sold at Kmart, and how everyone was getting rainchecks?  Well, yeah, it seems that Google never told Augen that they could use their Market on the tablet, and Augen says that they didn’t mean to release the tablet with the Market on it.

Currently, Google has not licensed the Market for any tablet that does not have telephone capabilities, and it seemed odd that a highly unknown company all-of-the-sudden had rights to it.  It seems that it was an “unauthorized” version of it, and Augen told Laptop Magazine it was supposed to have been removed before release, but was “overlooked.” Laptop’s article also includes a letter from the CEO of Auguen, explaining the situation. Google and Augen have reached an agreement to take the Android Market off of all future releases, and that seems to suffice for the time being.  And the version that is out there on the initial batch of tablets doe snot actually work.