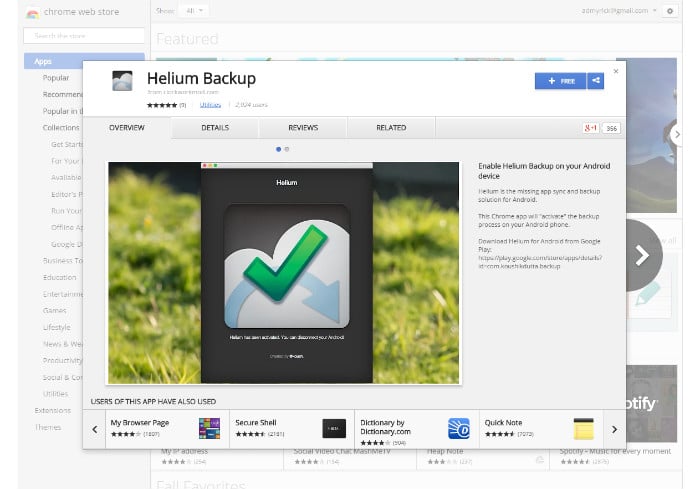 Koushik Dutta is known quite well around the Android community. From the ClockworkMod ROM Manager, to AllCast (which is making it’s way to iOS), and Helium. Formerly known as Carbon, Helium is an application that is designed to help you back up and restore all of your Android apps without needing to root your device. There are some “complicated” steps, such as plugging your device into your computer, but that’s about the extent of it.

Well, Koush has released an accompanying Chrome web app by the same name, Helium, and this is to help those ChromeOS users with backing their apps and information up on the go. Now you will still need to have the Android application installed on your device of choice, in order for Helium to work properly. From there, all you will need to do is plug your device into your computer and things should be working.

Helium will work on any desktop running Chrome, including ChromeOS and Linux. Now you will need to enable ADB before you can use Helium with Linux computers, but after that is finished, everything should be smooth sailing. We must note that if you are planning to update your devices to Lollipop, that Helium MAY not work completely. It’s a little too early to tell, but if you rely on Helium a lot, then it’s probably better to hold off until compatibility can be thoroughly checked.

There are two versions of the Helium app available. There is a lite version, which only allows you to backup and restore to your SD card or to your PC is available for free. The premium version of Helium is $4.99, but has the following features:

Personally, when it comes backups, I don’t like to play around with that, and happily paid for the $4.99 premium version. What do you use to backup all of your Android apps and data? Helium could definitely make a run at being the perfect replacement, especially with this new app for Chrome.