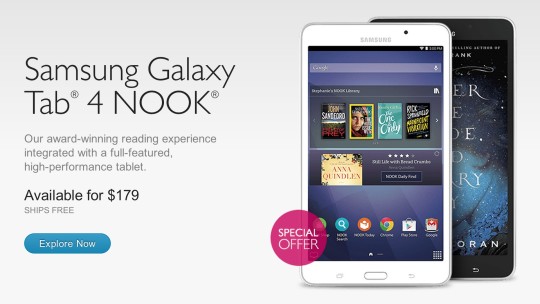 Everyone loves a deal. If you’re in the market for a new tablet, Barnes and Noble may be a seller worth exploring. Entering early into the Android tablet space some years ago, with the release of the Nook Color, Barnes and Noble has seen growth in their content delivery service. Since B&N’s initial foray into the the tablet space, the world’s largest retail book conglomerate has expanded its Nook lineup to include 7 inch and 10 inch variants from Samsung. The relatively low cost and high availability of these devices have made them very attractive for entry level users looking for the best tablet and eReader ecosystem without becoming a member for an expensive service like Amazon Prime.

From now until Saturday June 13, Barnes and Noble is offering the Samsung Galaxy Tab 4 Nook 7.0 for $149.99 and the Samsung Galaxy Tab 4 Nook 10.1 for $279.99. As tablets go this is kind of a steal. If you have a tablet to trade in, the deal gets even better. Users trading in an iPad 4, for example, can get up to $200 in trade-in value. This in a stark contrast to users with a Nexus device that will get either $25 or $100 for trading their devices. This is of course dependent on size of the device. The bigger the screen, the bigger the trade-in. Both Nook devices yield similar specs in terms of size, camera, etc. The real differentiating qualities are how much storage you can add (the 7in tablet can expand to 32gb where the 10in can expand to 64gb) and the size of the screen. B&N is touting this as a “Dads and Grads” kind of sale. Will this be on shopping list this month?  Father’s day is, of course, just around the corner.