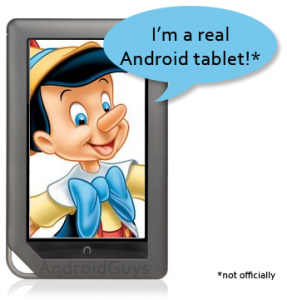 We were contacted by a representative this afternoon regarding the alleged NOOKcolor update due in January.  As we feared, the news was too good to be true.  The NOOKcolor is not getting the Android Market as part of any update, nor has one been announced for January.  We heard at launch time that B&N were going to offer their own apps and distribution model for users and that is still the case.  However, don’t look for access to the 100,000 strong library that handsets currently enjoy.

As we learned on day one, Barnes & Noble is committed to their own Nook Developer program which may be an entirely different and yummy experience.  Having said that, hackers have been able to do all sorts of wonderful things to this device already.  If you’re still bent on getting the Market app and titles on the NOOKcolor, there are ways.