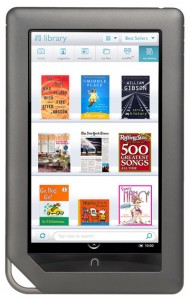 It seems that Barnes and Noble is going to be stopping the sales of their popular Android-powered Nook Color for the next two weeks. This comes as somewhat of a surprise to people who have been  looking to get one and use it as a tablet.  After all, it is one of the first devices on the streets to handle a port of the Honeycomb SDK.

As for the exact reason for the two week hiatus, one side says it’s to ready a Froyo update.  Another side thinks it’s because so many people have been buying them and rooting them, re-purposing device as a cheap, full blown Android tablet.  A third, and more likely scenario, is the line we’re getting from Barnes & Noble.  According to them, it is the result of a bug in B&N’s inventory system and that shipments were ceased so that a company-wide stock count could take place.

“B&N’s short-term solution to the problem is to move stock from one store to another to cover demand, with cooperation at the local level between stores.”

So there you have it, nothing as scary as it first sounds.  However, we’re curious as to how many of you gave the extra thought to the idea of running out to get a NOOKColor?  Are you worried that a locked bootloader could ruin your plans down the road?

Update: It seems that this was all either a marketing ploy or something, but it looks like Barnes and Noble has gotten the NOOKColor in stock, and is actively selling them. The only thing is good luck on finding them, they are selling faster than hot cakes.