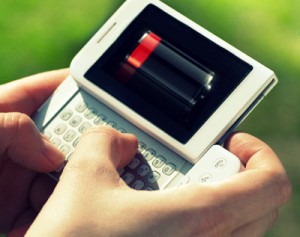 With CES behind us and CTIA fast approaching, one begins to think about the laundry list of impressive features being added to Android handsets and tablets. Dual-core, HD display, HDMI, WiFi hotspot, 3D, Near Field Communication, ‘4G’…the list goes on and on. All features you definitely want on your new Android. Mobile technology and the Android operating system have been growing at an amazing pace – think of how far we’ve come from October 2008. From Cupcake to Gingerbread: 5 different versions of android in just over two years – a new version every 5.4 months. What’s left to improve upon, you might ask? The mobile battery – it’s not holding up its end of the deal.

How many times have you found yourself turning off the GPS and other features on your handset in order to keep it from dying? There are countless apps devoted simply to killing other apps that suck the charge from your phone. One could even argue that one of the big drivers behind Android rooting and custom ROMs is the pursuit of longer battery life. Cell manufacturers are even designing displays, processors, and other components specifically to ‘sip’ energy in order to prolong time between charges. But what if they didn’t have to? Could the processors be faster? Could the screens be clearer and brighter? What other sensors could be utilized? I’m hoping that 2011 will find the wireless industry focusing on dramatically bettering my time between charges. I don’t know about you, but I’d like to spend more time enjoying my Android’s features  and less time carrying around a pocket full of extra batteries.

Having said all of this, I’m optimistic about what the future holds.  The improvements in Android and its battery consumption and task handling get better with each release.  Handsets like the Atrix 4G and its 1930mAh battery prove that Motorola and other companies can up the life while still preserving a thin form factor.  We’re on the right track, but the train is not moving fast enough.

Have you resorted to an extended battery just to get your phone through the day?  Ever need to uninstall apps or turn them off because of battery life?  How many times a day do you charge your phone?  I’d love to hear from you in the comments.