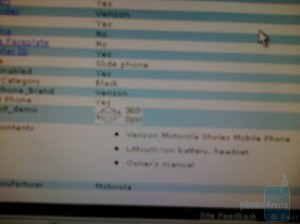 The official unveiling of the Verizon/Motorola Droid is slated to go down next week on the 28th with sale dates and formal announcements likely monpolizing the news next Wednesday.Â  Rumors have the launch pegged for sometime early November, recently leaked Best Buy documents indicate a Droid invasion starting October 24th.Â  That’s right – this weekend.

Looking through the blurred pictures we can see a few indications that the handset is the Droid.

Before you grab your car keys and going running out of the house to stand in line, it’s important to remember that nothing is being confirmed by anyone… anywhere.Â  As nice as it would be to grab your Droid this Saturday, we don’t know for certain whether or not that’s going to be possible.Â  While it is known that accessories have started showing up in some locations, nobody has their hands on one of these in the wild… Except for BGR.

It’s interesting to see the full retail price here.Â  At $599 it definitely is the most expensive Android handset so far.

One thing is certain through all of this – The Droid is right around the corner and the Android invasion is upon us.