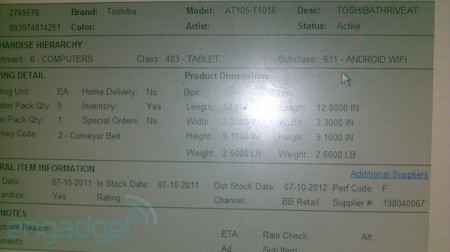 Toshiba is one of the leading technology companies in the world and I am sure you all are familiar with Toshiba laptops and televisions. Recently, Toshiba announced their first ever Android tablet which is known as Toshiba Thrive. We already told you that Toshiba Thrive is an amazing tablet and it was made available for pre-order on June 13. Now it looks like Toshiba is ready to launch it officially via BestBuy because a screenshot is leaked by Engadget which is informing us that they will officially launch the tablet this coming Sunday, July 10th i.e. coming Sunday. Engadget claims that it is shot of BestBuy internal inventory system and BestBuy is ready to launch the Wi-Fi version of Toshiba Thrive this Sunday

If you don’t know about the specs of Toshiba Thrive, then check them out after the break:

So who is planning to get one from BestBuy next week, anyone? Or, have you been lucky enough to have already snagged one from your local store?