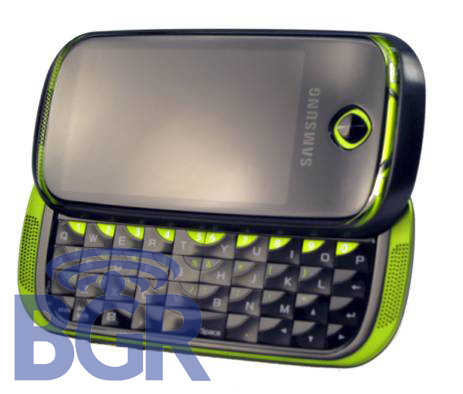 After much speculation, it appears the handset going Â by the codename of ‘Bigfoot’ belongs to Samsung. Â The Boy Genius Report was able to snag a high(er) resolution picture of the device headed for T-Mobile.

As far as specs go, it’s said to have a 3 megapixel camera,Â UMTS/HSDPA support and a 3.0â€³ capacitive AMOLED touch screen. Â Looking at the pic, we see it also has a 4 row QWERTY whereas the G1 has 5 rows. Â There are no Home, Back, or Buttons on the front, so that should provide a different user experience as well. Â Since it’s not HTC, there is obviously no chin either.

The handset is reportedly coming to T-Mobile sooner and not later. Â Sure would be nice to have 2-3 new phones to choose from over the next few weeks.

Anyone like that green? Â Asking a different way – would anyone shy away from this handset because of the color?

BTW, we’d like to point out that we were in fact wrong guessing the Bigfoot‘s maker. Â We leaned towards Moto and HTC more than Samsung.

UPDATE: According to Phonedog, this handset may not even run Android.Â  That explains the lack of front screen buttons.Â  As far as this handset not resembling the Bigfoot we’ve seen before, those (and possibly this) are mockups and not an actual photo.

Be sure to check back for more as this develops.