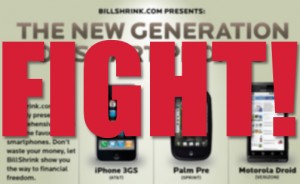 So you’re thinking about getting the Droid from Verizon but don’t know how much it’s going to set you back.Â  Sure you know the phone costs $199 after rebate, but what’s the long-term cost of ownership?Â  That’s where BillShrink.com comes in.Â  They’ve just announced the “first-ever handset selector interactive feature that letâ€™s you search by features and then matches you to the best phone and plan.” Naturally, the Motorola Droid is paired up against the Palm Pre and the iPhone.Â  So how does it fare?

Not only can you match up phones by hardware specs but also available apps and average usage plans.Â  The figures can be a little bit daunting when you get down to the bottom line.Â  It’s somewhat scary to think about how much money is spent on your phone(s) over 2 years.