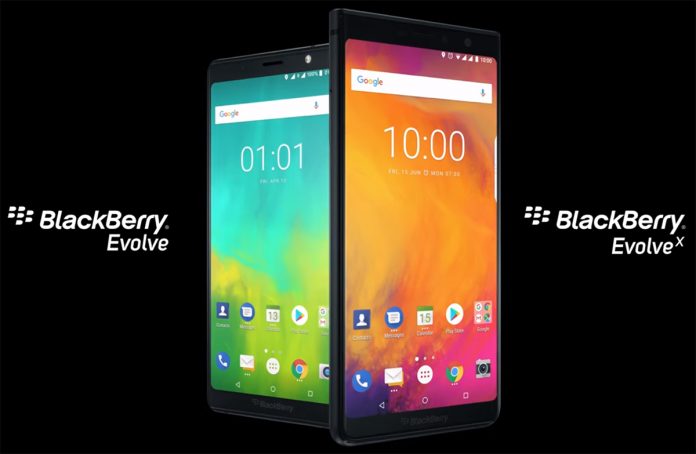 BlackBerry is back at it this time with their partner Optiemus to launch the Evolve and Evolve X in India. These two midrange phones include 6-inch 18:9 HD+ displays and massive 4000mAh batteries. However, they are lacking the physical keyboard you’d find on the Key 2.

The Evolve and Evolve X are also packing a fingerprint scanner, BlackBerry’s DTEK security app, and the BlackBerry Hub. This should give the duo plenty of security and the unified communications hub that BlackBerry users have become accustomed too.

Both phones will launch with Android Oreo 8.1 and include 64GB of storage with a MicroSD card slot for expansion. So far the BlackBerry Evolve and Evolve X are identical, that is until it comes to the camera and some internal specs.

The Evolve is powered by the Snapdragon 450, 4GB of RAM, and includes a dual 13MP camera setup. In contrast, the Evolve X ups the ante with a more powerful Snapdragon 660, 6GB of RAM, and wireless charging. The camera also differs with a 12MP f/1.8 shooter paired with a secondary 13MP f/2.6 camera on the back.

Another area you’ll find a difference is in the price. The BlackBerry Evolve will set you back 24,990 rupees or $364 USD, while the Evolve X is 34,990 rupees or $509 USD. Given the upgraded internals the price difference of the Evolve X is justified. However, given all the great competition in the midrange market the BlackBerry Evolve series is a little pricey. The optional cashback offers from the Indian carriers and banks might help with that though.

Both the Evolve and Evolve X are expected to launch on August 20th in India. Unfortunately, there is no word of these coming to the US anytime soon. I don’t know about you but I would welcome some more BlackBerry phones stateside. Perhaps in the future, they will see fit to release more models here.