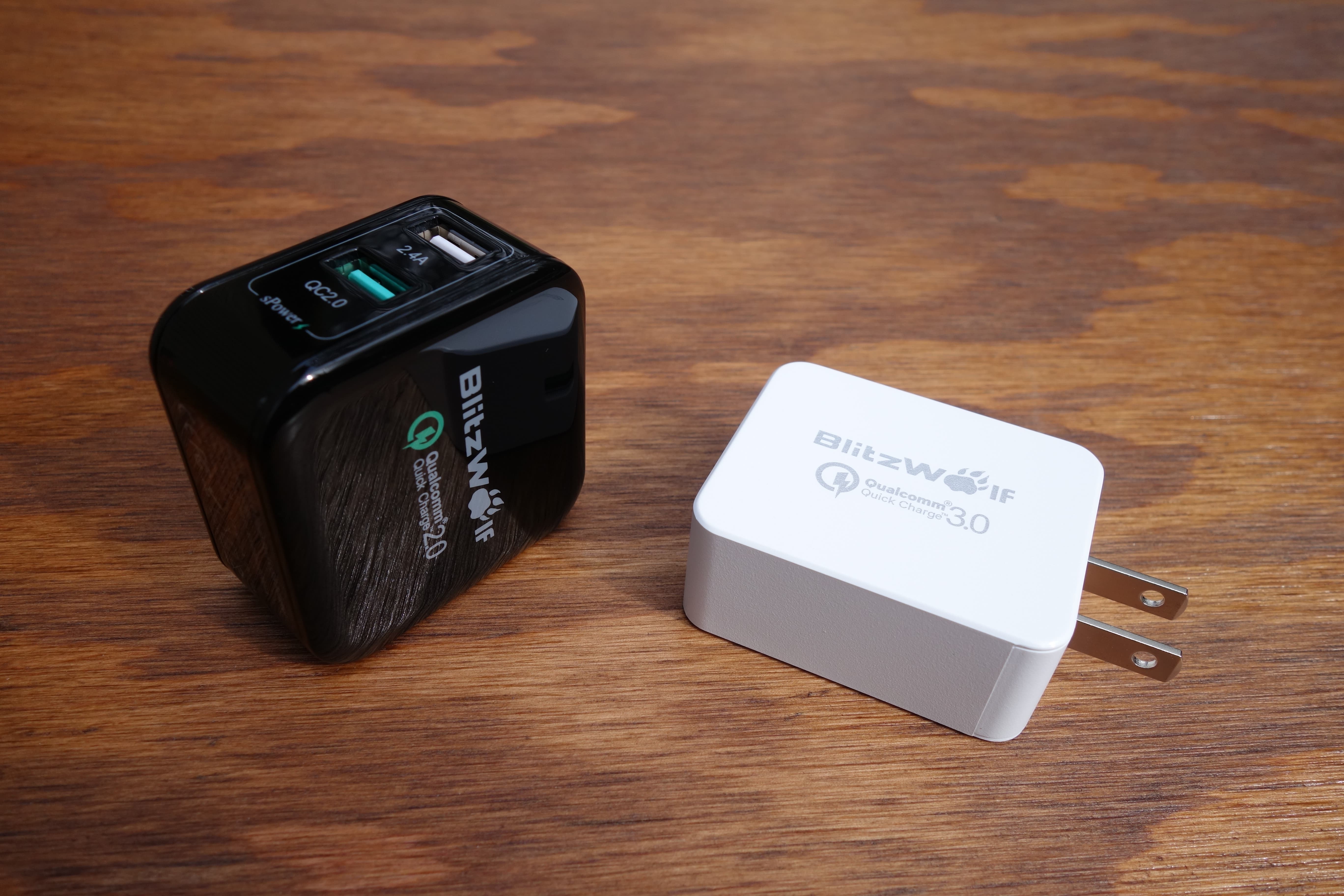 I don’t know about you, but sometimes it seems like I can’t have too many chargers. When that low battery notification hits, I just want one to be readily nearby. It’s also nice to have options when you travel.

Thankfully, there are a variety of third-party choices these days, even for Qualcomm’s latest standards. Many folks don’t want to buy an additional fast charger from the phone OEM, because they typically charge an arm and a leg. So with that, let me introduce two excellent chargers from Blitzwolf. 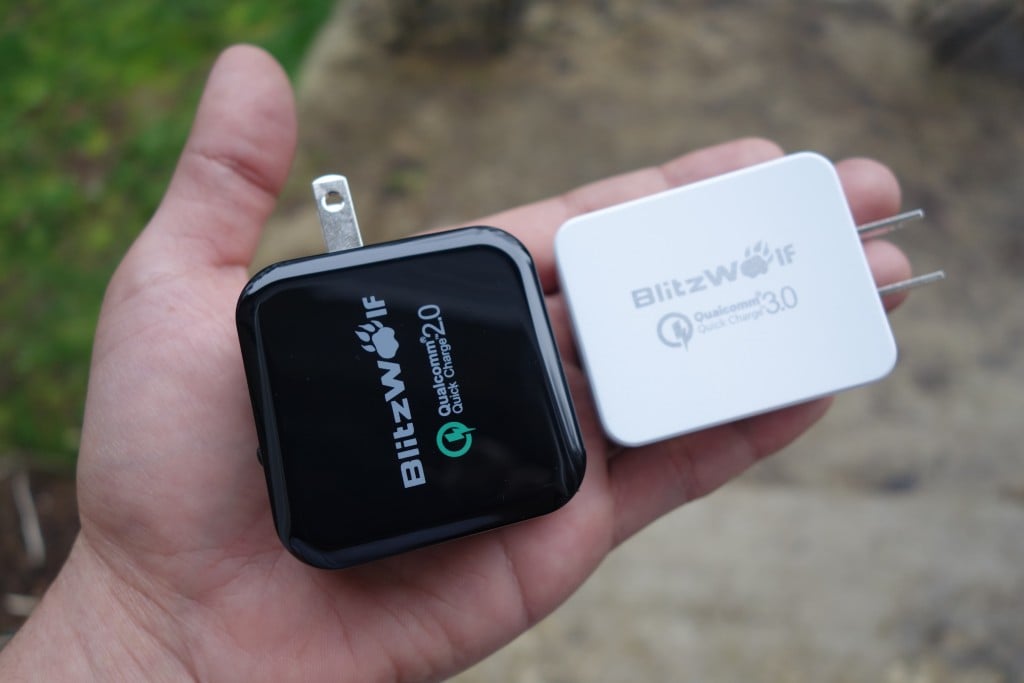 One of them is capable of the Quick Charge (QC) 2.0 speed and the other future proofs you for the next wave – QC 3.0. Let’s check them out.

These two chargers are the same but different. They both have a cube design, but the finishes on the plastic are different. The QC 2.0 model is glossy all around while the QC 3.0 model is matte. I would say that the latter feels less cheap, and it doesn’t leave fingerprints. 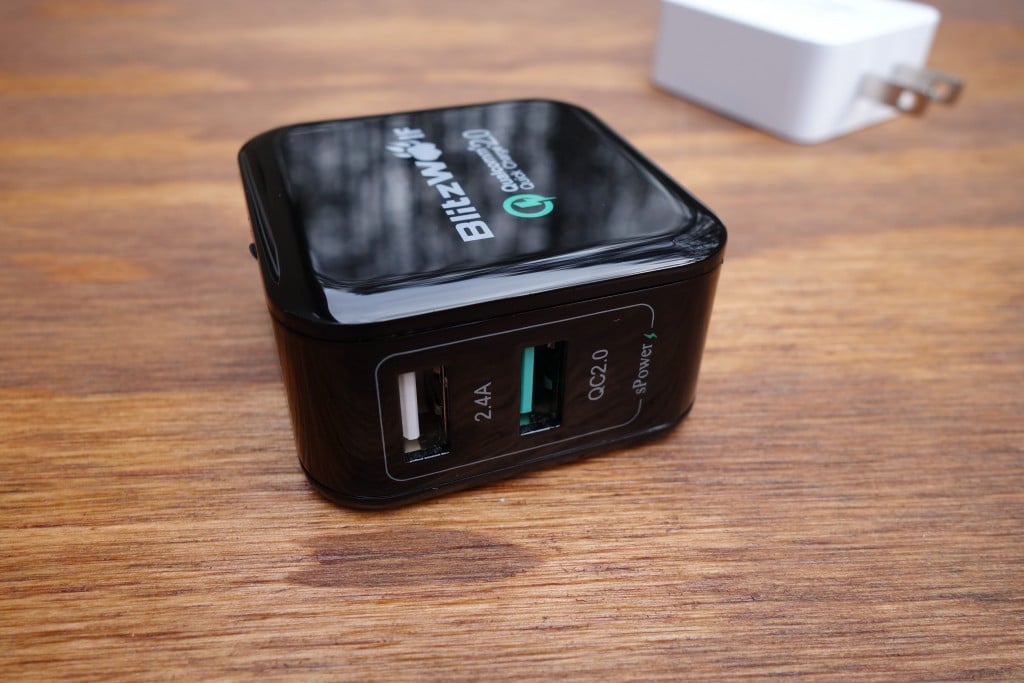 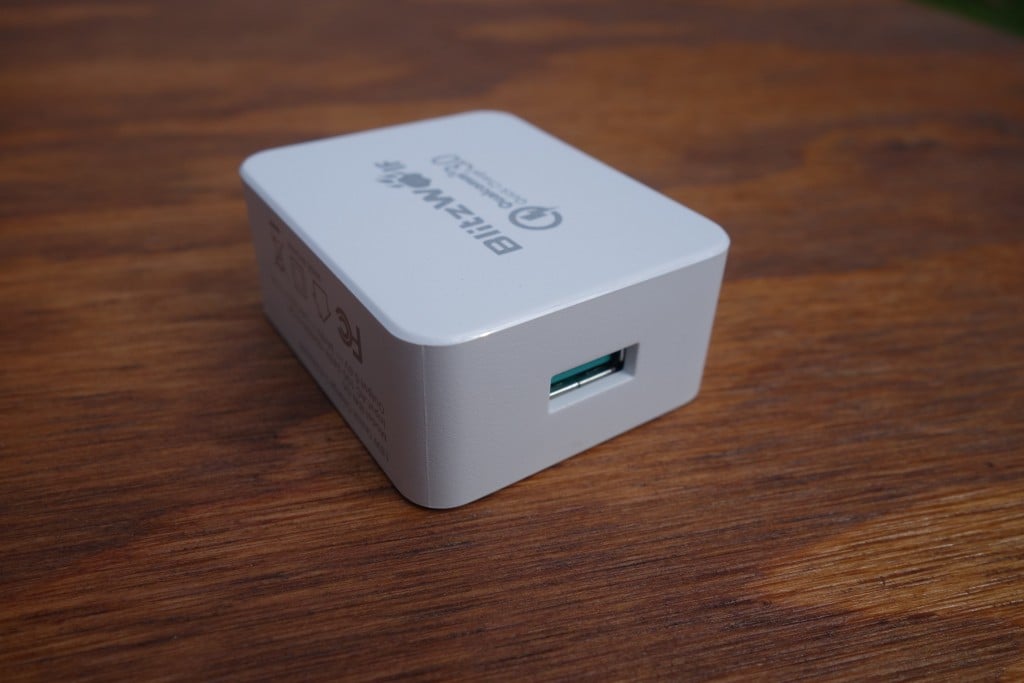 The QC 2.0 unit is thicker and wider, but that’s because of the extra features. There’s an extra USB outlet and the prongs can fold (a nice feature for traveling). The functionality of the QC 3.0 model is more direct – just one charging port and rigid prongs. 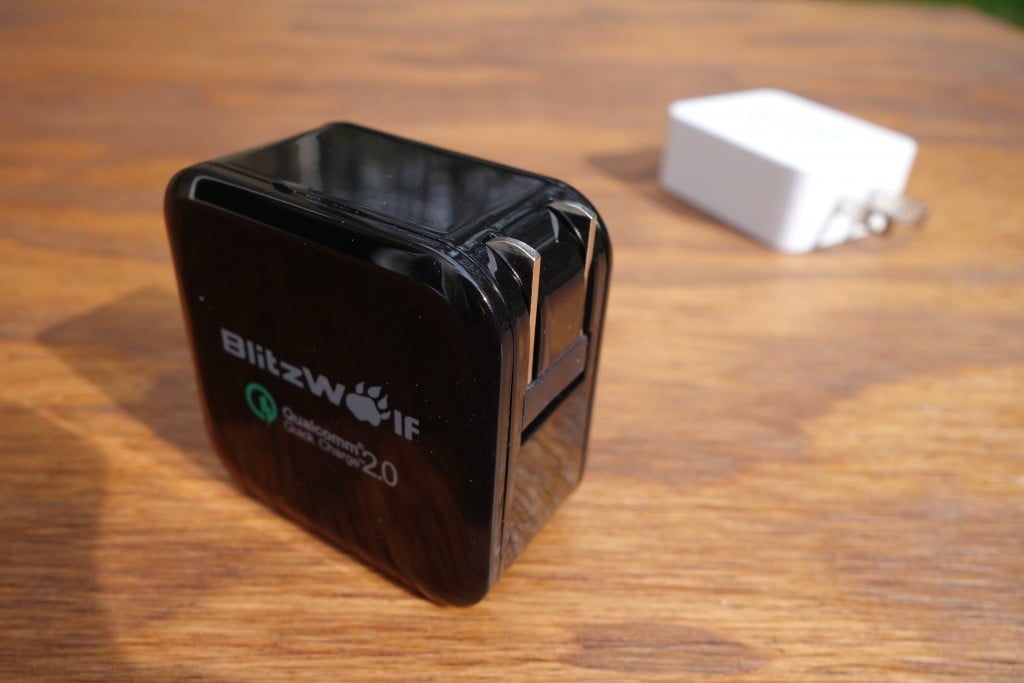 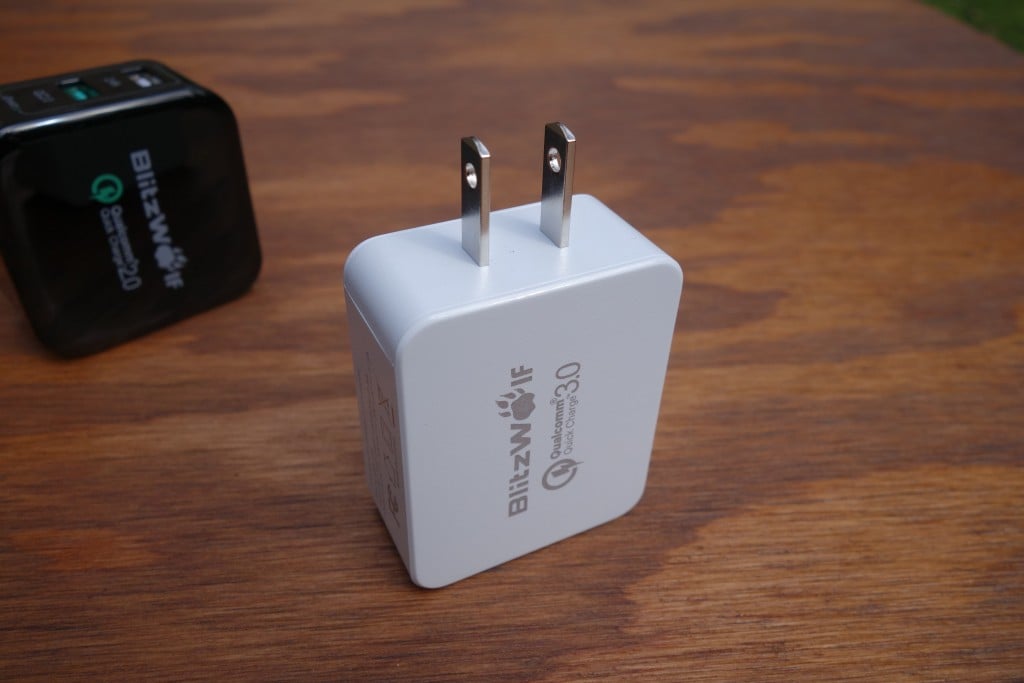 Despite the different in-hand feel, they’re both constructed solidly and give no indication that they won’t hold up.

I briefly touched on the difference in functionality between the two. The QC 2.0 model has an extra charging port, but sadly, only one of them charges at the QC 2.0 speed. The other port has a 2.4A output, which is at least faster than what the pre-QC 2.0 days were. 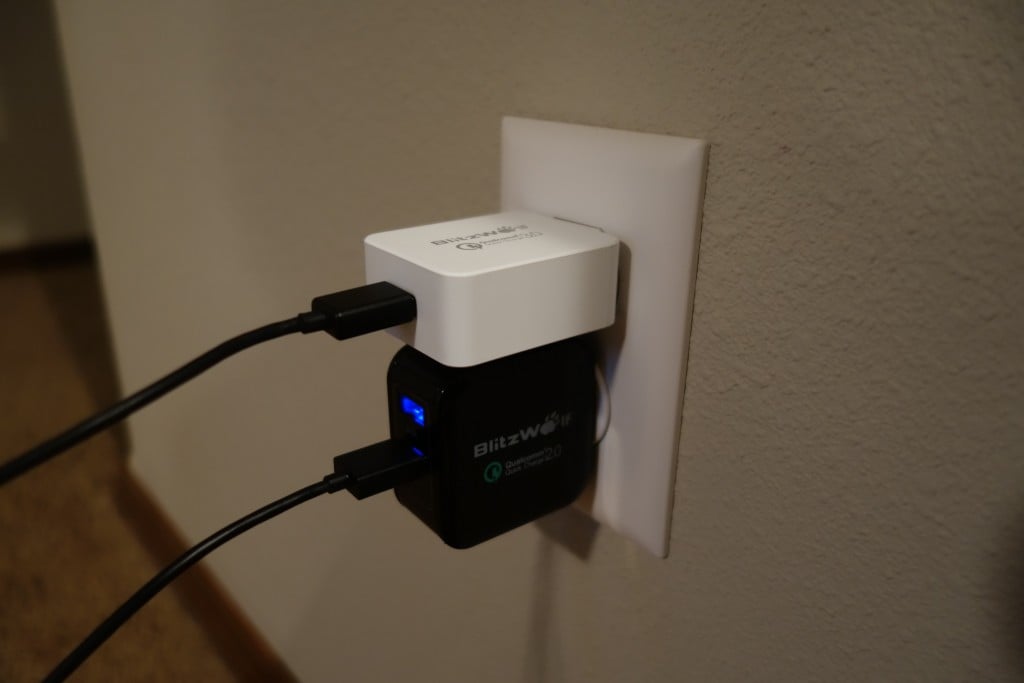 When you plug in the QC 2.0 charger, you see a blue hue emit from the charging ports. While it’s cool, I wonder if the light would bug anyone while they’re trying to sleep. You don’t see anything flashy on the QC 3.0 of the sorts.

As expected, the chargers work as advertised. I get the “fast charging” indication and speed on my phone. But note that I could not test the QC 3.0 speed, because there aren’t any phones out yet that utilize it (not even the newly launched Galaxy S7). Fortunately, it’s backwards compatible with QC 2.0, so you would buy it at this point to be future-proof.

Both units also have overcharging and overloading protection for your devices. Dubbed Power3S, the charger is said to intelligently detect the connected device and deliver the appropriate power.

You can’t really go wrong with BlitzWolf’s charger offerings. They’re solidly build and function as they should. The prices are also decent. You can pick up the QC 2.0 and QC 3.0 models for the same $11.50 price (and free shipping) from Banggood.com.

In my experience with them, I really don’t see any reason for someone to pay 3x more for an OEM charger. The functionality is the same.

Special thanks to Banggood.com for supplying the review units! 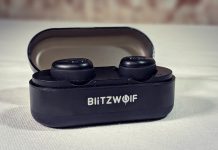 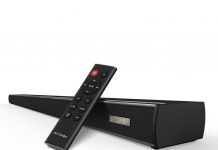 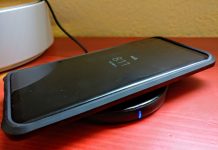