Blu products is known for very cost efficient phones. You won’t find much in their lineup over $300 and they always seem to have great specs. This time Blu is kicking it up a notch releasing a flagship level phone for $350. Let’s take a peek at the specs first. At first glance, this is an absolutely stunner in terms of specs. Only a few phones have broken past the 3 GB of RAM mark at this point in 2015 so the Pure XL is absolutely on par for a top tier device.

The 6″ screen reminds of us of the Nexus 6 and all the complaints we’ve heard of it being too big. And for most part, it really was. The Nexus 6 is a monster. You could adjust but it required compromise and it appears the Pure XL is going to require even more of an adjustment. While it’s not as wide, 82.2mm vs. 83mm or as thick, 9.6mm vs. 10.1mm as the Nexus 6, it’s taller at 164mm vs. 159.3mm. The rounded back of the Nexus 6 definitely helped in handling it, we’ll see if the more flat back of the Pure XL hurts it here.

The fact that the Pure XL is launching with Android 5.1 Lollipop on board is an encouraging sign. Blu has gotten flack in the past about their dearth of updates and the lack of pace in the updates that do see the light of day. Normally you could just flash a custom ROM with a newer version of Android, but since we’re seeing a MediaTek chip here, that might prove challenging. Development for the MediaTek chips comes about slow, or not at all due to poor documentation from the chip maker. 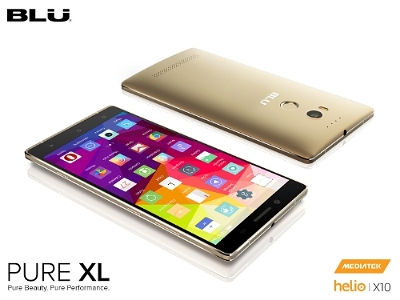 We’re also seeing a fingerprint sensor on the back of the device for added security. This is becoming a pretty standard feature and it’s great to see “Flagship killers” like the Blu Pure XL and OnePlus 2 include it. We high end features like a fingerprint reader on more expensive devices like the Samsung Galaxy Note 5 or Apple iPhone but keeping costs low can force smaller OEMs to leave out such features.

The Pure XL will boast a 24 megapixel camera with a f/2.0 aperture, optical image stabilization, 1/2.3 inch sensor, real time HDR, dual-tone LED flash and phase detection auto-focus. One thing that we’re seeing on the Pure X is a dedicated camera button. Many others claim to care about cameras while throwing out specs and features but only Samsung and LG have risen above the crowd. Now Blu tops them all with a dedicated camera button.

Photography is advancing so rapidly that we’re getting phones that can almost make you justify putting away the point and shoot cameras. The fact that you may be able to get a phone for $350 with these kinds of specs is pretty fabulous. But the proof will be in the pudding. We’ve seen plenty of phones with beefed up specs on paper, so we’re not going to trust those numbers before recommending this camera.

And to top it off, the Blu Pure XL will be made out of a solid aluminum design. It will feature chamfered edges, an “all day” battery with quick charging, and come in gold and grey. We’ve heard plenty of phones talk about all day battery and not deliver so we’re going to have to test this one out before we give it out stamp of approval. 3,500 mAh is an impressive size for a battery but it’s also pushing a decacore processor and 6″ 2560 x 1440 screen. That’s a lot of pixels to power, even if it is an AMOLED panel which turns black pixels off to save power and to sport and impressive contrast ratio. What do you think about the Blu Pure XL? Does this take the place of the OnePlus 2 as the cheap flagship killer for 2015? Or would you rather spend more money for a name brand phone that more reliably updates their phone? Let us know in the comments what your reaction to the Blu Pure XL is.