Bluetooth headphones have been gaining popularity, but some users may still be searching for great headphones that can withstand their daily routine. Enter BlueAnt, a company specializing in Bluetooth accessories, and their Pump HD Sportbuds. BlueAnt put a lot of time and thought into these rugged Bluetooth headphones, and it shows in every aspect, from the build quality to the usability.

Now all that is interesting, but how does it translate into real-world usage? The short answer is that the Sportbuds are some of the best Bluetooth headphones for their value on the market. 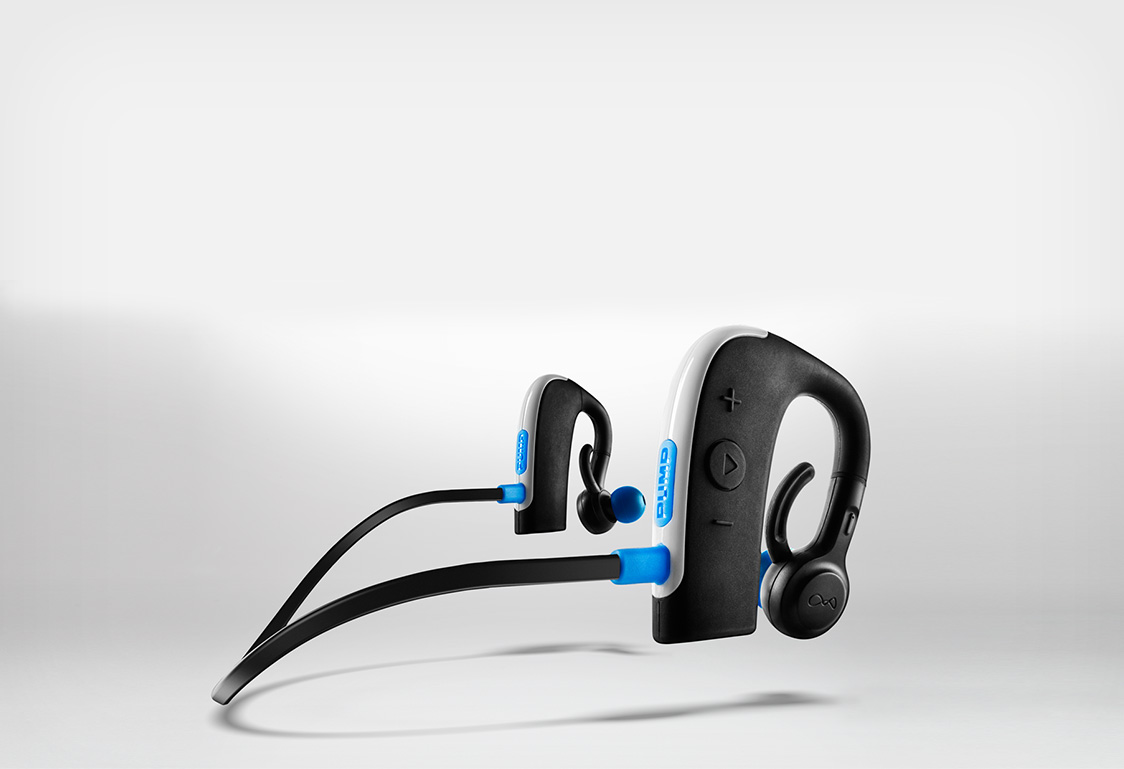 In other words, these headphones get the job done, and that begins with the build quality. BlueAnt decided to make them behind-the-ear headphones, which is a love-or-hate decision. After a week of usage and testing, I found that I had no problem with their form factor. They were fairly easy to put on, and felt comfortable as I went about my day. Of course, it doesn’t hurt that the Sportbuds are mostly covered in a soft-touch matte material that just looks and feels great. They’re connected by a wire, so that users don’t lose one of the headphones. BlueAnt offers the SPortbuds in three colors: black, blue, and green. I got the chance to review the black version (pictured above), which is accented with blue highlights.

The bodies of the headphones look rather large and intrusive at first glance, but they fit behind the ear fairly well (with one exception, which we’ll discuss later). From the body, a slim arm connects the earpiece itself. The spine of each headphone is mostly covered in a shiny plastic, with small “Pump” logos embedded near the bottom. Along the bottom of the left headphone, you’ll find a small silicone cover, which pulls back to reveal the MicroUSB charging port. This cover serves to protect the port from dirt, sweat, and water. Despite being so small, the cover opens very easily.

Along the side of the right headphone are three buttons: play/pause, volume up, and volume down. These are still covered in the matte material, but are raised from the surface of the body of the headphone itself. These buttons serve multiple purposes, but we’ll get into that in just a moment. They are solid buttons, giving off a defined clicking feeling when pressed. 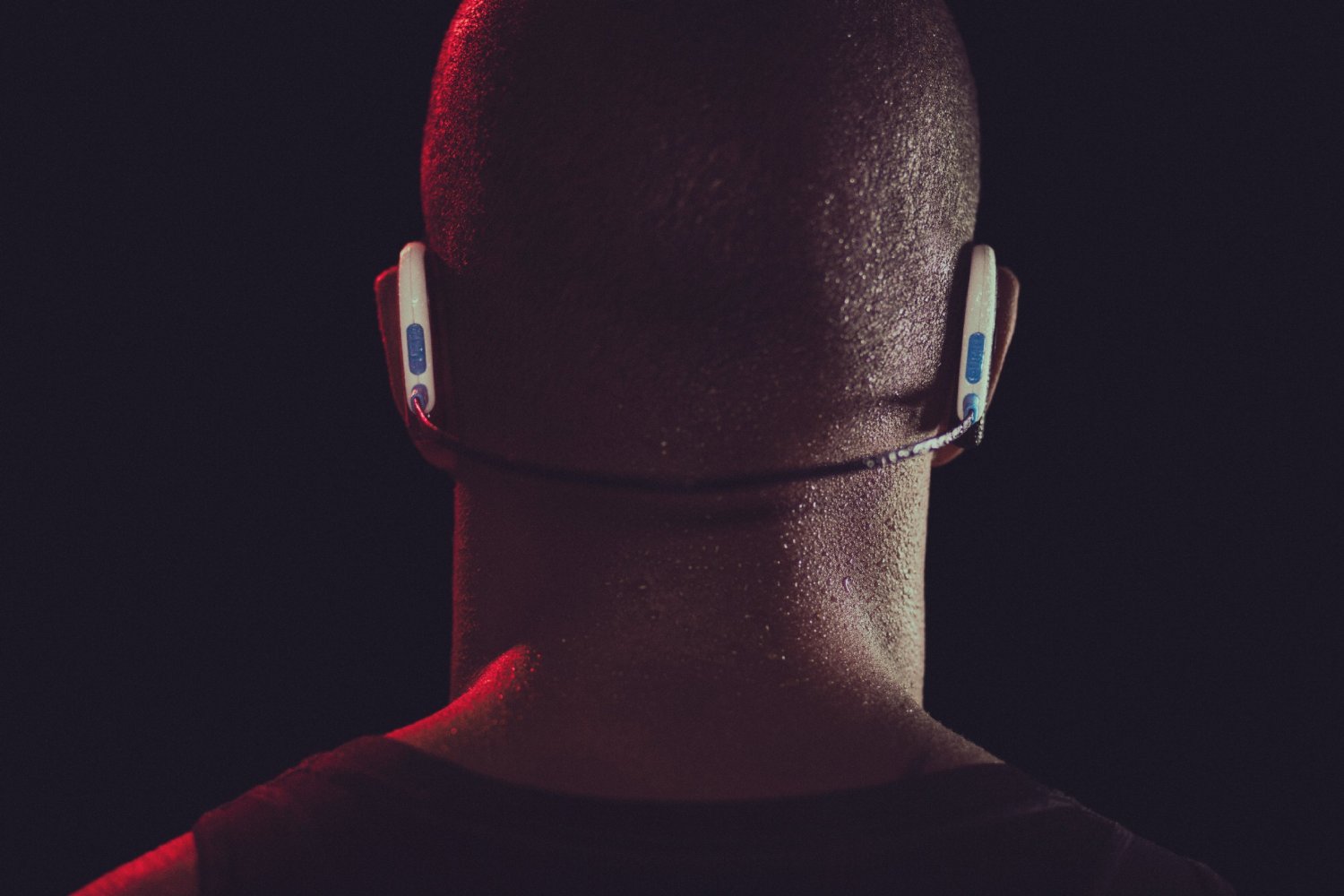 One of the biggest concerns surrounding this style of headphones is the ease of getting them on and off the ears, and it seems that BlueAnt focused heavily on this area as they developed the Sportbuds. Out of the box, I had no trouble getting the Sportbuds on and off, and BlueAnt even includes a section in their user manual that shows users how to put the Sportbuds on properly. Once they’re on, the Sportbuds are stable and comfortable. BlueAnt intended for these headphones to be used in extreme conditions (i.e. going for a jog in the pouring rain and being chased by zombies), and they designed them to stay on the user’s ears very well. I went on several runs with the Sportbuds, and had no problems with keeping them on my ears. The wraparound design serves its purpose by keeping the headphones stationary, so that users never have to worry about them falling off or coming loose during a run/workout/zombie apocalypse. BlueAnt also included two pairs of “stabilizers,” which are meant to make the Sportbuds even more stable.

While they are very comfortable, I ran into a slight problem the first time I put them on. Because I wear glasses virtually all the time, the Sportbuds were nearly impossible to fit behind my ear. At first, I thought that this would prevent me from using the Sportbuds completely, which would have been an issue that BlueAnt might need to address, given the number of users who wear glasses (or Google Glass, of course). I quickly learned that I have to take the glasses off and put the Sportbuds on first, then put the glasses back on, so that the headphones rest under the legs of the glasses. Once I discovered this, it became easier (although slightly irritating) to put the Sportbuds on my ears. While it is somewhat bothersome, it was actually not that noticeable once I got into the habit. 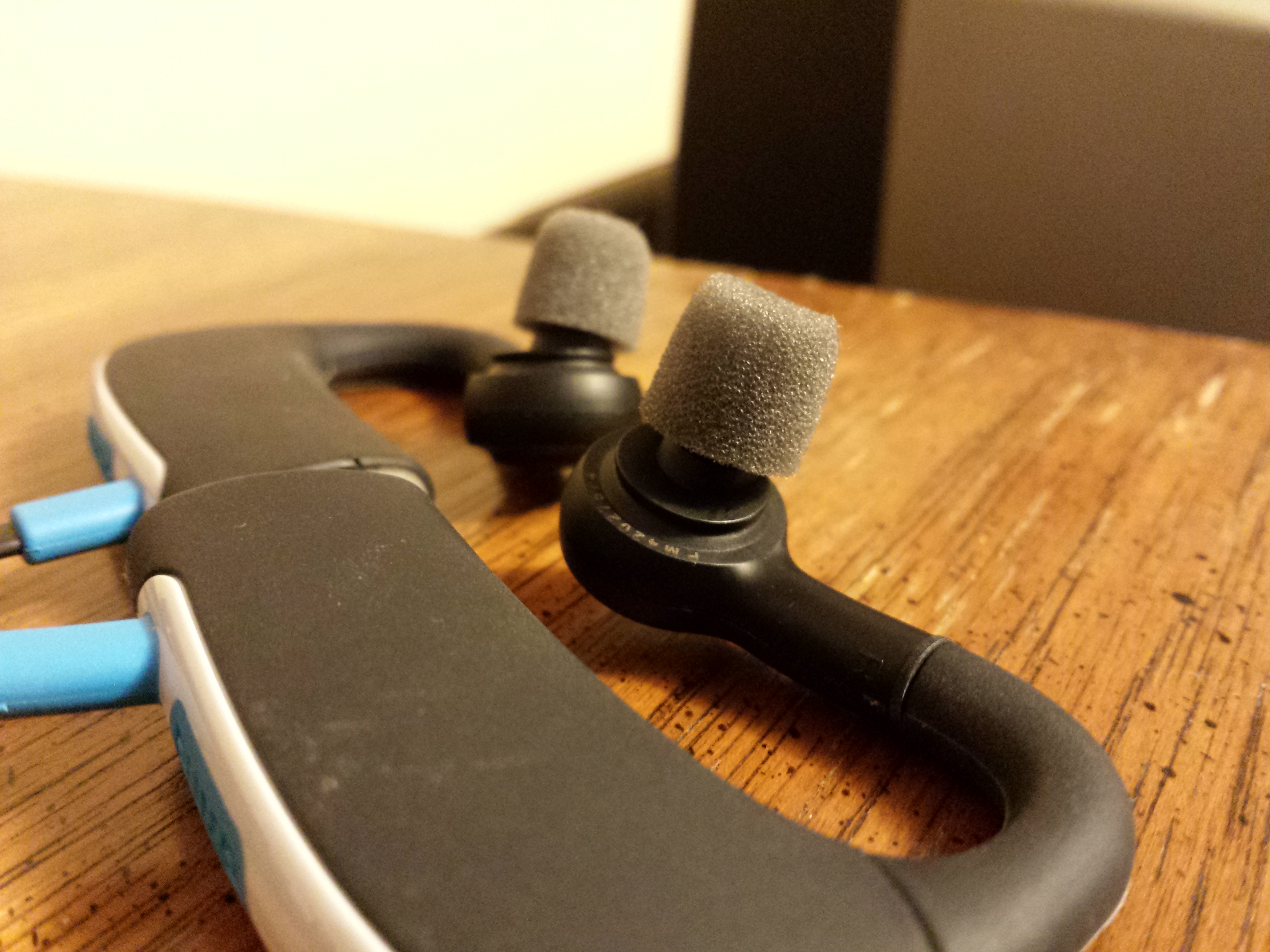 It’s worth mentioning that BlueAnt gives users seven pairs of earbud tips for the Sportbuds: two pairs of large tips, two pairs of medium tips, and two pairs of small tips. The seventh pair is labeled as “Comply Premium,” and unlike the rest of the rubberized earbud tips, these are covered in foam. While that does sound nice, I was sadly disappointed by these “premium” tips. They are covered in foam, but they’re supported in the middle by a small tube that appears to be made of some kind of heavy plastic. Because the foam is very pliable, the end result here is the tube pressing into the ear canal, which makes for a very unpleasant listening experience. After listening to one song with these tips, I had to take them out of my ears and replace them with the normal comfort seal tips. I appreciate BlueAnt trying to go the extra mile by giving users foam inserts, but the support tubes in them are far too uncomfortable to use. Other than this, I had no real issues with the comfort level that the Sportbuds provide.

So they fit well, but how easy are they to set up? This was one concern I had when I began using the Sportbuds, but BlueAnt again made sure that this process was as seamless as possible. Pairing the headphones with my Galaxy S4 was as simple as holding down the play/pause button and searching for them in the Bluetooth menu of my phone. The whole process took less than half a minute, and I was able to start playing music immediately. The play/pause and volume buttons work like a charm, with each having multiple functions. Holding down the volume up/down buttons will skip songs (up for Next, down for Previous, respectively), and the play/pause button serves to turn the Sportbuds on and off by holding down for three seconds. In addition, users can double-click this button and it will start a voice search in Google Now. The play/pause button also serves to answer or reject calls. All its functions are listed in the user manual. 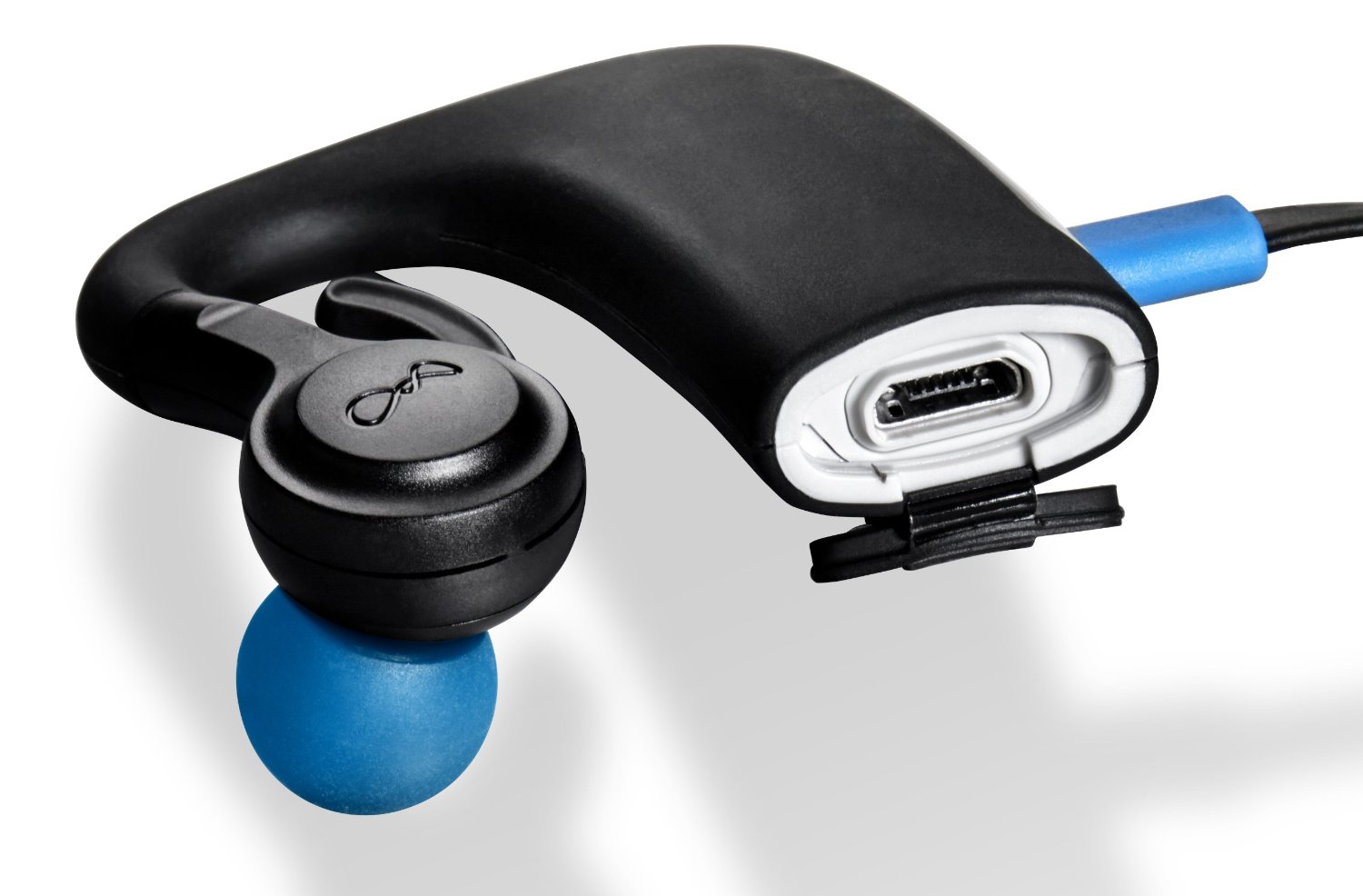 Battery life on the Sportbuds fits with the 8 hours that BlueAnt boasts. I had no trouble getting 7-8 hours of life out of the headphones, with music playing at nearly full volume. This was a nice bonus, as I worried that they would need charging after just a few hours. BlueAnt wanted to make sure that users were able to listen to music for as long as possible, and in harsh conditions. Charging the Sportbuds is as simple as opening the charging port cover and plugging in a standard MicroUSB cable (one is included with the headphones). That 2-hour charge time is also accurate based on my testing. After finally managing to run the battery all the way down, the Sportbuds charged completely in a little under two hours.

The specs mentioned that the Sportbuds are waterproof, which is one major advantage that they hold over many other Bluetooth headphones. Even so, they do have some limitations. Obviously the charging port cover must be fully closed before they’re subjected to water. In addition, BlueAnt recommends that users not shower with the Sportbuds (because the audio will sound garbled when the ears fill up with water), although they can certainly withstand it. The headphones can even be rinsed (in cold water) if they get dirty, which was a great addition on BlueAnt’s part. For the most part, I would imagine the waterproof aspect appeals most to users heavily focused on fitness, as the Sportbuds are designed to handle water, dirt, and sweat.

The Sportbuds actually have a very high quality sound, which BlueAnt calls “Energize HD Audio.” They made sure that every level of sound got the proper attention, from the bass to the mids to the highs. Whatever they did, it gives users a great sound that doesn’t appear to compromise in any area. Every song I listened to, no matter the genre, came through crystal clear with strong bass and treble output. I was surprised by the bass that BlueAnt threw into the Sportbuds, which played even the most bass-heavy songs I have (namely some dubstep and remix tracks) with clarity and ease.

Interestingly BlueAnt claims that users can get up to 100 feet of range with these Bluetooth headphones. After testing, I was only able to get around 45 feet away from my phone before the audio began cutting in and out. 45 feet is still impressive, but it is a far cry from the 100 that BlueAnt is boasting.

If you’re intrigued by the Pump HD Sportbuds, you can grab a pair directly from BlueAnt, or from Amazon for $129.99