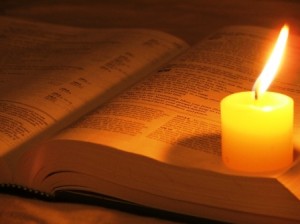 A recent article detailing the release of the Droid included this sentence.

So, at midnight last night, the world experienced Android 2.0 for the very first time.Â  And the world was happy.

The last sentence had a very Biblical tone or maybe I just read it that way.Â  Either way it got me to thinking about the genesis of what is now the battle between the iPhone and Android.Â  This isn’t ultimate good vs. ultimate evil but with the battle lines drawn and loyalties entrenched, I thought it was worth a Biblically inspired look back.

The Book of Phone Wars – Chapter 1

1 In the beginning Apple created the iPhone.

2 Now the iPhone was devoid of the ability to run multiple applications and a hardware keyboard, because of this darkness was always close to the phone.

3 Apple squelched the darkness through catchy marketing, however, and left without choices the people complained but conceded.

4 Apple said “Let there be apps!” and there were apps.

5 People saw that the apps were good and downloaded them to the delight of developers.

6 Apple deemed some apps “Acceptable” but others were declared “Revoked”.

7 Apple said “There is iPhone and there is everything else.”

8 So a division was created that lasted for years.

9 People enjoyed their iPhone and the multitude–yay multitude of apps; times were good.

10 The darkness, though squelched, grew; the camera was weak, there were no widgets. Tthe people wanted to customize and replace their battery but they were denied.

12 So Google said, “Let us make a mobile OS in our image; it will rule over the mobile environment, it will exist on every carrier and all creatures will enjoy its open-source goodness.”

14 Google said to Android, “Be frutiful and multiply, increase in number, fill the earth and navigate it.Â  Rule over email and calendars, over contact lists and social networking sites.”

15 HTC saw the goodness that was Android and built a place for it to stay.

16 So Google joined with HTC and the two became one, a Dream was born.

17 The union produced an Eden-like phone that hadn’t been seen before, Apple took note.

18 A Google Motorola union formed an iDO where the iPhone was an iDON’T; people took note.

19 Google looked at what it had made and saw that it was good.

20 Yes, Google looked at what is had made and it was very good.

22 The battle raged for years until a clear-cut leader emerged.Â  A crown was placed on its head and it ruled over all of Mobile OS for years and years.

23 That ruler of course was

Odd, but the manuscript ends there.Â  I guess we will have to just live through the “Phone-Wars” to see how this really ends.Â  But, from my point of view I’m betting on a green tinted Mobile OS ruler!