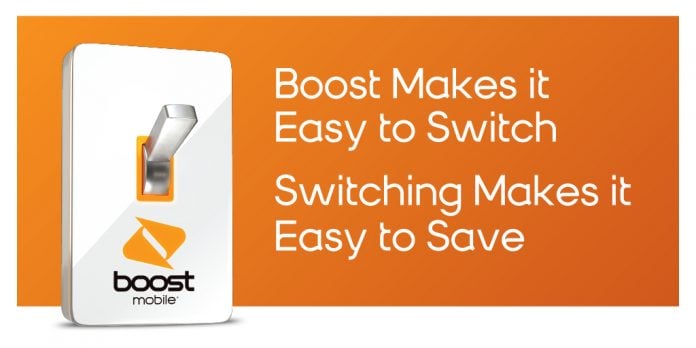 To better promote “Project Switch”, Boost also launched a new TV spot in major markets such as Los Angeles, New York, Dallas and Miami. You can watch it below. The spot was filmed in one of the new “Next Generation” stores which Boost has set up around the country. The prepaid brand plans to have 1,000 such experiences available by the end of 2017.

Now you’re perhaps wondering what will signing up with “Project Switch” get you? As advertised in the commercial, Boost offers three or four lines on an account with unlimited talk, text and data service for $100 a month.

The carrier hopes to attract customers to its “Project Switch” by pointing out that at MetroPCS only offers 2GB on each line, while at Boost you get unlimited data.

Naturally, there are some limitations to the plan: you get 480p video streaming, music up to 500kbps and gaming connections will go as far as 20Mbps. While data is unlimited, traffic can be slowed down if you’ve used more than 23GB of data on one line during a billing cycle.

A fifth line can be added for $30 and Boost Mobile will also award switchers a Samsung phone free of charge for each line signed up for up to four lines while supplies last.

Boost’s newly announced switching incentives will be available until June 1, so you best hurry up if you want to take advantage of them.