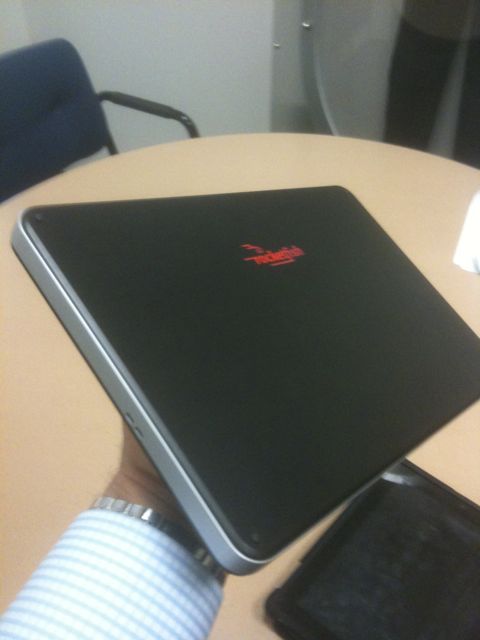 Best Buy recently announced a strategic relationship with Clearwire, which should see the retail giant providing 4G mobile broadband service under the Best Buy Connect brand. As part of the deal, Best Buy will offer a one stop shop and support for mobile broadband devices to take advantage of the speedy 4G network. One such device is likely to be the newly-twitter-leaked Rocketfish tablet.

Best Buy CTO and Geek Squad founder, Robert Stephens, has been a busy bee lately, tweeting out hints about the company’s initiatives. Stephens tweeted back in July that Best Buy was working on an Android 2.2 tablet. Late last week, the CTO shared a pair of images online which showed the device in a powered-off state. Without much to go on, we’re left to assume these two are one in the same. To fuel the rumor frenzy is another tweet from Ben Hedrington, web strategist for Best Buy, adding, “Hint hint… be looking for a little green robot on that Best Buy tablet screen…” with a URL linked to CrunchGear’s coverage of said device.

As with all rumors, we’ll find out sooner or later.  I’d love to see more big name players get involved in the tablet game.  The more crowded, the better.  That is of course, provided these aren’t all Shanzai knock-offs we’re talking about.