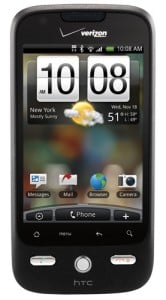 Official news out of the Verizon camp confirms much of what we’ve been reporting on for the last few weeks.Â  The HTC Droid ERISÂ  goes on sale tomorrow at stores around the country for $99 after a mail-in rebate and a 2-year agreement. Normally, this would be a bigger story, but Verizon’s decided to play it cool with ERIS hype and devote everything to DROID.

DROID ERIS is nearly identical to Sprint’s Hero, also made by HTC.Â  The biggest and most obvious difference being that Verizon’s offering their handset at roughly half the price. Â  Both give customer the ability to customize seven panels of the desktop screen with apps and widgets designed by Google and HTC. Â  As part of Sense, customer can also set up different home screens to reflect on the various needs throughout the day.Â  Preloaded “Scenes”Â  include Home, Work, and Play with a potentially unlimited number of ways to customize them.Â  Final specifications include:

DROID ERIS will be available in Verizon Stores and online at www.verizonwireless.com on starting tomorrow, Nov. 6, for $99.99 after a $100 mail-in rebate (debit card) with a new two-year customer agreement on a voice plan that includes an e-mail feature or e-mail plan.

Here’s a link to Engadget Mobile’s unboxing and gallery.