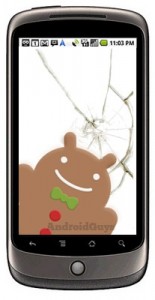 Some Nexus One owners who rejoiced at getting Gingerbread in February have just weeks later begun griping about a bug in their phone’s version of Android 2.3.

Affected users report a 2-3 second delay after a phone call connects during which they can neither hear nor be heard by the person on the line. So far, over the course of  almost six weeks, more than fifty users have described the same issue on Google’s bug tracker for Android, and nearly 200 have starred the issue. Most are running stock Android 2.3.3, with a few running 2.3.3-based custom firmware.

With Gingerbread running on so few phones, it’s worth considering whether this is an issue with Gingerbread across the board or with the Nexus One’s specific build. No users in the bug tracker thread mention other models, but we did find references in various forums to the issue cropping up on the HTC Desire as well. We checked with a Nexus S owner as well as a Droid X owner who has flashed the recent Gingerbread build for that phone; neither had run into the issue.

So far, no Google employees have participated in the bug tracker thread. We reached out to Google for a comment, but have not heard back. With the Nexus One over a year old and no longer a flagship, it’s not clear how much attention the issue will receive.

In the mean time, those affected can try a third party app that claims to patch the problem. Unfortunately, Market reviews indicate the patch may not work consistently for everyone.

Nexus One and Desire owners, let us know in the comments if you’ve experienced this call delay issue and if so, how you are dealing with it.