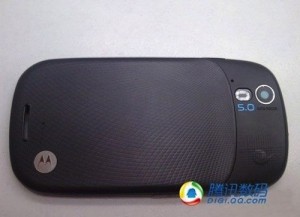 We’ve got another Motorola handset to add to the Android repertoire!Â  Chinese website DIGI.QQ (translated) has the first four pictures of what is being dubbed “Zeppelin” from Motorola.Â  Unfortunately, the phone seems a bit camera shy as it never rolls over on its back to give us a frontal pic. Looking closely at the back, we can see support for both GSM and CDMA networks.Â  This would mark the first World phone from Motorola to run Android.

Other specs gleaned from the article and pictures include:

As of right now, the pricing and carrier information is unknown.Â  DIGI.QQ does say the release is China bound for first quarter of next year (Q1’10).Â  More on this one as it develops!