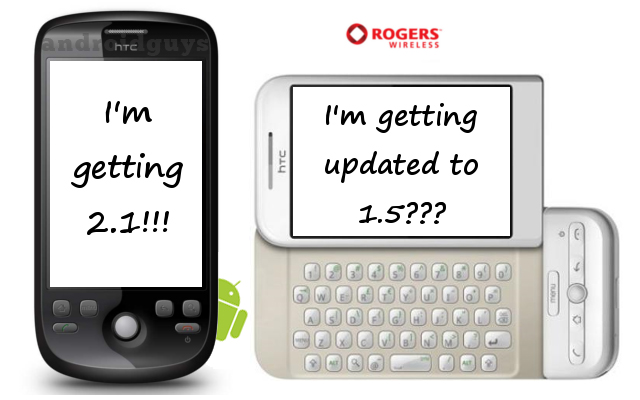 So it would appear that the “IWantMyOnePointSix” (twitter:@IWMOPS) group has had their voices heard.Â  In the coming months, both HTC Dream and HTC Magic owners will be seeing upgrades to their current software.

The updates that HTC has so far decided on are only minor for the Dream due to hardware limitations, although the Magic will be given a full update to Android’s latest and greatest 2.1 which was officially announced yesterday at the Google Android Conference. Although this at first appears to be good news, those who are reading and currently own a Rogers HTC Dream are slightly shocked that their brother/sister device is getting upgraded to 2.1 and they are not. So I would assume that IWMOPS’s purpose is still not complete.

It is hard to believe that HTC would think we would believe them when they say the Dream has hardware limitations when many of us, including myself are already running 1.6 without any loss in speed or functionality. Following this news we are sure to see an even larger outcry from this group that will most likely continue until they get what they want, so stay tuned for more information regarding this issue in the coming weeks.

Set release dates and known details are as follows:

In the upcoming weeks

Although a long time away for Android 2.1, it’s something to look forward to and shows that Canada may not be as behind as it has proven to be in the past.

Also congratulations to IWMOPS for your victory.