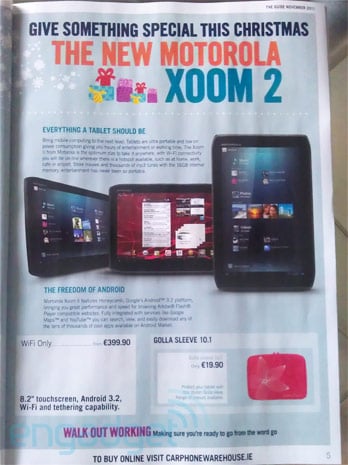 We’re fast approaching the time when the successor to the Honeycomb-powered Xoom is announced and we see whether or not Motorola can get it right the second time out.  As details and specs leak online, we’re getting a pretty clear picture as to what to expect for the next-generation tablet.  One feature that will largely factor into the success or failure of Motorola’s next effort will be its price point.  Will Verizon tag it with a high cost because of its 4G LTE connectivity or the carrier be a tad more reasonable?

We’ll have to wait for more official stuff out of Motorola and/or Verizon but it looks like we might know what the Wi-Fi model will cost.  According to a Carphone Warehouse ad that landed online, the 8.2-inch Wi-Fi Xoom 2 should run €399.90 (roughly $545) with 16GB of storage.