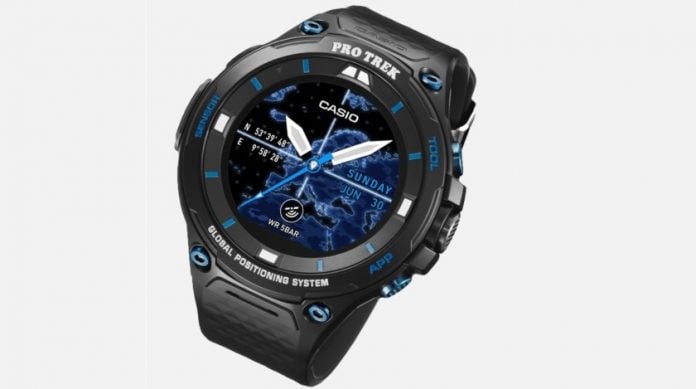 Android Wear 2.0 was launched last month and it already made it on plenty of new models. Just in recent days we told you about the Guess Connect and Montblanc Sumit and now Casio has announced it is joining the Android Wear 2.0 family.

Remember the Casio WSD-F20 which was unveiled at CES 2017? Well during Baselworld this week, the watch company unveiled a more rugged and luxurious version of the said model. The new arrival is called Casio Pro Trek WSD-F20S and is a limited edition model. To be more precise, only 500 models will ever be made.

The new smartwatch features a 1.32-inch TFT LCD display with 320 x 320 resolution. The display is said to have the ability of switching to monochrome mode when battery life needs to be saved. Casio also offers a built-in GPS with this model, Wi-Fi connectivity and Bluetooth 4.1. The watch is water resistant down to 5m.

The biggest difference from the standard model which got unveiled at CES 2017, is the resilient sapphire crystal and ion plating on the buttons, screws and buckle hardware. The limited edition will be offered in black and blue with a special case to top it all.

With Android Wear 2.0 onboard, users will be able to use standalone apps on their wrist as well as the advanced fitness options. And maybe Casio’s own slew of apps (like ViewRanger or MyRadar) will be available on the watch too.

The battery inside should last users more than one day in normal use mode. It takes about 2 hours to fully charge it back. For the time being, we don’t know how much the smartwatch will end up costing – but we doubt it’s going to be wallet-friendly, since it’s a limited edition watch and all.