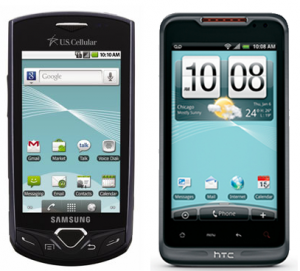 U.S. Cellular has added a pair of Android smart phones to their prepaid lineup today in the form of the HTC Merge and Samsung Gem. These two join another pair of Android handsets, LG Optimus U and LG Apex, as no-contract options for customers looking for Android power without long-term commitments.

The HTC Merge is U.S. Cellular’s first global-ready Android phone, capable of working overseas with international carriers. The $299.99 phone runs Android 2.2 with HTC Sense UI and provides users with a 3.8-inch display, 5-megapixel camera, and a sliding QWERTY keyboard. Additional details include an 8GB microSD card and support for Wi-Fi, GPS, and Bluetooth.

On the lower end of the spectrum, the $139.99 Samsung Gem runs Android 2.2 and gives consumers a 3.2-inch display, 3.2-megapixel camera, and all the other requisite Android support.

While U.S. Cellular offers prepaid plans that range from $40 to $70 per month, the carrier is waiving activation fees for anything at $50 or higher.

CHICAGO (August 16, 2011) – U.S. Cellular (NYSE: USM) has good news for those who want to stay on top of their budget while enjoying a cutting-edge smartphone. The carrier has added two more Android™-powered devices to its lineup of prepaid plans. In addition to the LG Optimus U™ and LG Apex™, the Samsung Gem™ and HTC Merge™ are now available with U.S. Cellular’s monthly prepaid plans that range from $40 to $70. Currently, the activation fees for monthly prepaid plans $50 and higher are waived.

Also, the free app Social Scene, which consolidates Facebook, Twitter and a host of other social networks into one place, is now available for download to prepaid data customers on 11 of the carrier’s most popular messaging phones. Use Social Scene to quickly upload pictures from your device, Tweet and re-Tweet in real time and stream customized RSS feeds from more than 50 news, entertainment and sports sites.

“By adding two more feature-packed smartphones and Social Scene on messaging phones, we are giving customers more prepaid options that help them stay organized and connected to family and friends while avoiding bill surprises,” said David Kimbell, vice president of marketing for U.S. Cellular. “Switch to U.S. Cellular and join the happiest customers in wireless.”

Keeping up with family and friends is easy with the Samsung Gem. With the touch of one button, users can update their status and post photos and messages to their favorite social networking sites. The Gem also features a 3.2” full touch screen with advanced anti-scratch, anti-smudge and anti-reflective protective glass

The HTC Merge, U.S. Cellular’s first Android-powered Global Ready smartphone, allows users to stay in touch no matter the continent or time zone by using the required SIM card and service for the country they’re visiting. It also has a keyboard that can be switched to 18 different languages and offers users the freedom to check Facebook, tweet, text, surf the web and access e-mails anytime and anywhere.

For more information about all of U.S. Cellular’s prepaid Plans, phones and other restrictions on these offers, visit any U.S. Cellular store, go to uscellular.com or check out U.S. Cellular on Facebook.

The Samsung Gem is $139.99, and the HTC Merge is $299.99. An activation fee may apply for prepaid plans below $50. The term “Global Ready” indicates that the HTC Merge has the capability to operate in international markets.