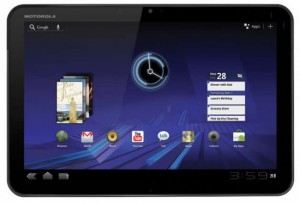 That’s right, the Xoom is no longer a Verizon exclusive. U.S. Cellular began selling the Android 3.1 tablet today, and it’s sure to bring business up a notch. After a quick first glance, it appears to be exactly the same as the Verizon Xoom. I did make one note, however: the U.S. Cellular version doesn’t directly connect to the network. Users will have to add a $25 data plan to their line in order to tether the Xoom to their smartphone, thus utilizing the network. Of course, you could always just buy the Xoom and use it as a WiFi tablet.

Granted, this isn’t just a sudden launch. U.S. Cellular made the official announcement back in April, and the device is just making it onto shelves today. Sadly, it’ll cost you exactly the same as its Big Red brother, at $599.99. It’ll be interesting to see how this device sells on U.S. Cellular, who haven’t made any promises regarding 4G or LTE, unlike Verizon, who promised an LTE upgrade for Xoom users. But enough of this chit-chat. If you’ve heard enough and want to pick up a Xoom for yourself, you can check out the Xoom page here.

So, what say ye, our faithful readers? Excited that Motorola is branching out with the Xoom? Don’t think it’ll sell very well on U.S. Cellular? Leave a comment below, or on our Facebook Wall! The full press release can also be found below.

CHICAGO (June 22, 2011) – Starting today, U.S. Cellular (NYSE: USM) customers can select the Motorola XOOM™ for $599.99 from the carrier’s growing catalog of mobile tablets. Customers can connect the Motorola XOOM to a Wi-Fi network or tether it to a U.S. Cellular smartphone to access the wireless company’s high-speed nationwide network, which has the highest call quality and network satisfaction of any national carrier.

The Motorola XOOM’s 10.1-inch widescreen display and unique interface make it easy to stay organized by streaming the web, videos, games, calendars and important information right to the customizable homescreen. It’s the first mobile tablet to use the Android 3.1 (Honeycomb) operating system that was designed specifically to run time-saving applications on a larger screen. Multi-taskers can get more done by managing several web browsing experiences at the same time. Those features are powered by a 1 GHz dual core processor that opens web pages twice as fast.

“The Motorola XOOM can be a productivity tool for employees who need quick access to information and applications, and its HD screen is ideal for watching movies and playing games,” said Edward Perez, vice president of sales and marketing operations for U.S. Cellular. “We’re providing our customers more options to find the device that meets their needs, which is one reason why we have the happiest customers in wireless.”

The Motorola XOOM features front and rear-facing cameras for video chatting on Google Talk™ and 32 GB of memory to store movies, music and other files. Multimedia fans can watch 10 hours of video on a single charge and play Adobe Flash® movies. It’s pre-loaded with other popular Google applications like Gmail™, Google Maps™ and Google eBooks™, which provides access to millions of books titles.

U.S. Cellular customers must add a $25 data plan to their account in order to tether the Motorola XOOM to their smartphone.

About U.S. Cellular
U.S. Cellular rewards its customers with unmatched benefits and industry-leading innovations designed to elevate the customer experience. The Chicago-based carrier has a strong line-up of cutting-edge devices that are all backed by its high-speed nationwide network that has the highest call quality of any national carrier. U.S. Cellular was named a J.D. Power and Associates 2011 Customer Service Champion and received PC Magazine’s 2011 Readers’ Choice Award. To learn more about U.S. Cellular, visit one of its retail stores or uscellular.com. To get the latest news, promos and videos, connect with U.S. Cellular on Facebook.com/uscellular,Twitter.com/uscellular and YouTube.com/uscellularcorp.

U.S. Cellular offers 50 percent off phones for all

U.S. Cellular is offering $300 for switchers