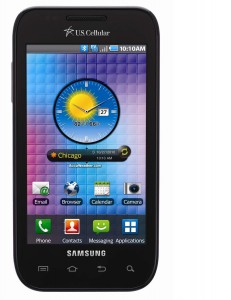 We just received official word from U.S. Cellular that they will be launching their Galaxy S series handset, the Samsung Mesmerize, on October 27th.  Much like the phones offered by the bigger carriers, it features a 4-inch AMOLED touchscreen, a 1 GHz Samsung Hummingbird processor, virtual QWERTY keyboard with Swype, and a 5 megapixel camera/camcorder.  And just like the top providers, U.S. Cellular will drop this Android 2.1 phone with a $199 price tag (after $80 mail-in rebate) later this month.  According to our contact, the Mesmerize will see Android 2.2 this year!

Full press release after the break!

Will be available in stores and at uscellular.com on October 27

CHICAGO (October 6, 2010) – Just days following the announcement of U.S. Cellular’s series of industry-first, customer-focused initiatives called The Belief Project, the carrier confirmed the Oct. 27 arrival of its next Android-powered device, the Samsung Mesmerize (SCH-i500). The Mesmerize is part of Samsung’s line of Galaxy STM smartphones and is the third of five smartphones the carrier is launching this year that run on the Android platform. U.S. Cellular will roll out the LG Apex in November and the LG Optimus in December.

U.S. Cellular’s growing catalog of Android-powered phones is a key part of its strategy to deliver cutting-edge devices while elevating the customer experience. The Belief Project was developed to fix the frustrations wireless customers have with their carriers, one project at a time, with innovations like “One and Done” contracts, a robust rewards program, simplified national rate plans and the industry’s only phone replacement program.

“Customers told us they want access to the newest phones and the Samsung Mesmerize is an impressive Android-powered device for people who want to stay connected to work, entertainment and the people who matter most to them,” said Edward Perez, vice president of marketing and sales operations for U.S. Cellular. “Our new Belief Plans are value-packed for customers who talk, text and need frequent access to data, and all of our phones are backed by our nationwide 3G network.”

About the Samsung Mesmerize
The Mesmerize features a brilliant 4-inch Super AMOLED™ touchscreen, making it easier to play games and watch movies in bright environments. Its 1 GHz Samsung Hummingbird Application processor speeds up downloads and uploads, and produces high-quality 3D graphics and multimedia content. Samsung’s All Share application allows customers to send video, audio and pictures from their Mesmerize to other DLNA-enabled devices, like TVs and computers.

The Mesmerize operates on the Android 2.1 platform with access to the 80,000 applications available on the Android Market. It includes popular Google Mobile Services including Google Search, Google Maps, Gmail, Google Talk and YouTube, and is pre-loaded with popular U.S. Cellular applications Your Navigator Deluxe, Tone Room Deluxe, My Contacts Backup and CityID. Customers can upgrade their software later this year to access Samsung’s Media Hub and migrate to the Android 2.2 platform, nicknamed “Froyo.”

The Mesmerize comes with a virtual QWERTY keyboard with Swype technology, allowing customers to input text quickly by sliding their finger over the keyboard in one continuous motion. It also features six-axis motion sensing for responsive gaming, Samsung’s Social Hub, a 5 megapixel camera/camcorder that records video in HD, MP3 player and 3.5 mm headphone jack, WiFi, Bluetooth 3.0 and expandable memory up to 32GB.

The Samsung Mesmerize will retail for $199 after an $80 mail-in rebate and will be available Oct. 27 at U.S. Cellular locations and at uscellular.com.