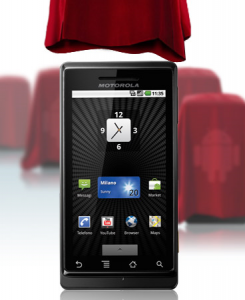 After teasing us with promises of a game changer and a coyly written tweet, Cellular South has officially announced that the Milestone will soon be available to customers.  The Motorola device is for all intents and purposes, a Droid. Specs include a 3.7-inch display,a 5 megapixel digital camera with dual-LED flash, and an 8GB memory card. Loaded with Android 2.1, the Milestone also offers the full Google experience with apps like Google Maps, Gmail, Google Talk, and YouTube. Pricing and the actual release date were not made available in the press release. For more information, customers are advised to check out Cellular South’s landing page for the Milestone.

In related news, Cellular South promises that the Milestone is but one of several new Android devices planned for this year!