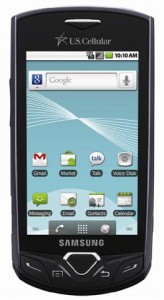 U.S. Cellular’s Android roster grows by one tomorrow as they roll out the Samsung Gem.  Starting April 1st, customers can pick up the Android 2.2-powered handset for only $29.99 after an $80 mail-in rebate. Hardware includes a 3.2-inch touch screen with advanced anti-scratch, a 3.2-megapixel camera, 4GM microSD card, and 1500mAh battery. While it won’t knock the socks off of tech lovers, it’s a pretty tough deal to pass up for those jumping from a feature phone. Hit the break for a copy of the press release.

U.S. CELLULAR LAUNCHES ‘JEWEL’ OF A PHONE IN SAMSUNG GEM™

The Latest Android-powered Smartphone at a Smart Price, $29.99

CHICAGO (March 31, 2011) – U.S. Cellular invites those who are ready to take the Android-powered plunge to indulge themselves with the wireless carrier’s latest device, the Samsung Gem. In stores and online April 1 for only $29.99 after an $80 mail-in rebate, this smartphone deal is no April Fools’ joke. It features a 3.2-inch full touch screen with advanced anti-scratch, anti-smudge and anti-reflective protective glass.

Keeping in touch with friends and family is easy with the Samsung Gem, which allows you to update your status and post photos and messages to all of your favorite social networking sites with the touch of one button. With its easy-to-use calendar, you can organize all of your social and business appointments. You can also drag and drop various widgets and icons to personalize your very own, one-of-a-kind start-up screen.

“We want to delight our customers with handsets that can be customized to meet their individual needs,” said David Kimbell, vice president of marketing for U.S. Cellular. “As the interest in smartphones continues to grow, we are thrilled to roll out high-performing, competitively priced devices that enable our customers to be more productive and simplify their lives.

The Belief Project recognizes customer loyalty with unmatched benefits and rewards like faster upgrades to the coolest phones in as little as 10 months without requiring customers to repeatedly sign contracts. It also offers an assortment of bundled National Single Line and Family Belief Plans designed to mirror the way people use their phones.

New customers who sign up for a Belief Plan and fulfill an initial two-year commitment will never have to sign another one with U.S. Cellular’s “no contract after the first.” Current U.S. Cellular customers who previously signed up for a Belief Plan and are already eligible for a phone upgrade can get promotional prices without signing another contract. Customers automatically get valuable rewards that can be used for faster phone upgrades in as little as 10 months, additional lines, phones, accessories and ringtones.

For more information about all of U.S. Cellular’s deals, plans and phones, and other restrictions on this offer, visit any U.S. Cellular store, go to uscellular.com or check out U.S. Cellular on Facebook.