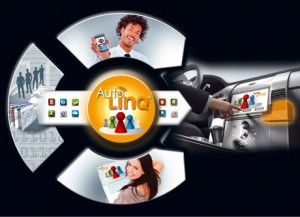 Automotive supplier Continental has announced that they will be demonstrating AutoLinQ, the world’s first automotive-grade head unit capable of downloading Android apps.Â  Further, they’re announcing plans to release an AutoLinQ Software Development Kit (SDK) to the Android Developers this first quarter of 2010.Â  As if that wasn’t enough, there will be an application store in the second half of the year!

“Integrating Android into the vehicle with a product such as AutoLinQ will help automakers further tie their vehicle platforms into the fast-paced world of consumer electronics.Â  With AutoLinQ, automakers will be able to offer vehicle owners an array of new features and functions, through downloadable applications, months after the car has left the dealership lot.” – Kieran O’Sullivan, executive vice president of Continental‘s Infotainment & Connectivity Business Unit

AutoLinQ is billed as a flexible automotive-grade hardware and software platform designed to arm vehicle owners with information relevant to their location.Â  For example, owners can pull up real-time vehicle status or run remote diagnostics a laptop or presumably, an Android phone.

For more information, check out the official press release.