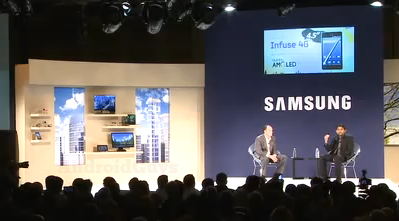 Samsung has released a video from their CES 2011 announcements with Omar Khan (Chief Strategy Officer) talking about Samsung Mobile USA’s plans for the coming year. Among the notable details are a new partner ship with CBS (Survivor, CSI, NCIS, etc) for their Media Hub as well as a direct carrier billing deal with T-Mobile for Media Hub content.  As we have been expecting for a while now, the company is releasing a WiFi-only version of their Galaxy Tab as well as 4-inch Galaxy Player.  There’s also talk here of the Nexus S and a brief mention of the new Infuse 4G from AT&T.