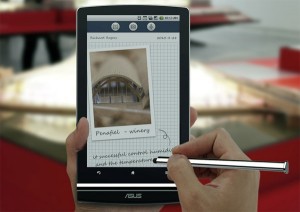 ASUS announced an impressive 7-inch Android tablet yesterday that has an interesting hook. They are incorporating a capacitive stylus for use in the bundled apps, “Media Note” and “Painter.”

This is a unique spin on pen-input. Stylus’ complimenting capacitive touch screens have not been pushed heavily into the Android world. This idea is very intriguing for tablets and could prove to be a successful gimmick.

Under the hood of the Eee Pad MeMO we find a dual-core 1.2GHz Qualcomm 8260 processor, which is also an exciting feature. A front-facing 1.2 megapixel camera and a back LED flash 5 megapixel camera also accompanies this bad boy. As far as which version of Android it is running, ASUS announced it will be running Android 3.0 Honeycomb at launch.

The ASUS Eee Pad MeMO will be released this June, starting in iPad territory at $499.

What do you guys think? Is a capacitive screen with a partner stylus something that you would try?