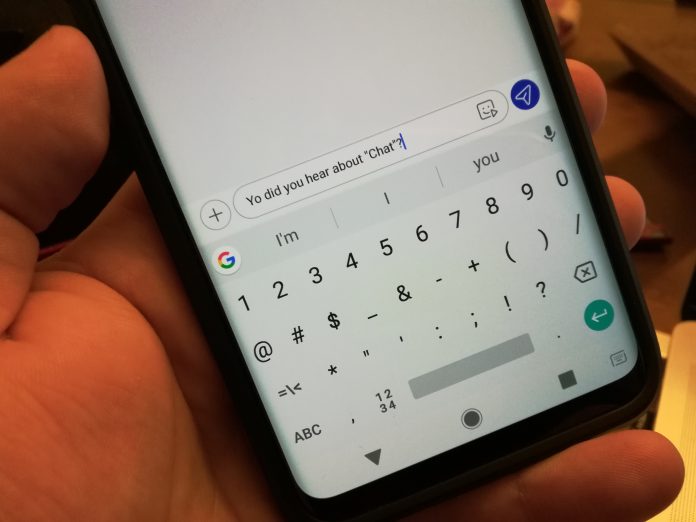 One of the biggest frustration for Android users over the last few years has been Google’s inability to decide on a messaging app. Let’s take a look at all of the different options:

That’s a lot of different messaging platforms for Google to experiment with over the years. Well, it seems that Google isn’t done yet, as a new Rich Communication Services-based service will be coming by the name of “Chat”.

In a report from The Verge, this will be Google’s attempt at finally creating an iMessage competitor. Unlike previous attempts, Chat will not become a separate entity, instead, it will be built into Android Messages.

“Chat” will bring new features to Android, such as read receipts, full-resolution photos/videos, and even typing indicators. Sound familiar? That’s everything that iMessage already offers iOS and Mac users.

The way that Chat will work is somewhat similar to iMessage. You will send a message to another Android buddy, and that will be sent up to your carrier.

This is for two reasons. The first of which is that any RCS messages will actually take up a little bit of your data plan. The second is so that if you send a message to someone who doesn’t have RCS functionality, the message will revert to SMS or MMS.

The benefit here is that Google is expecting for Chat to be made available on a myriad of Android devices before the end of the year. According to the report, Google already has support from 55 carriers and 11 different smartphone manufacturers.

The best part? Big-hitters like Samsung and Huawei are already on board with this new plan. On the carrier side of things, Sprint already supports RCS, and T-Mobile will support Chat by the end of Q2 2018. Verizon and AT&T have yet to announce any timelines for support.

What about the web?

A big benefit to iMessage is the “continuity” feature. This allows MacOS users to send texts from the comforts of their computers and can pick up the conversation on their iPhone or iPad.

It seems that Google is working on a web client, although it may be a bit janky at launch. Users will be required authenticate their accounts with a QR code.

This will be a temporary “feature” until Google is confident enough to make a seamless transition. Although it’s unknown how long we will have to wait for this to work properly.

Of course there is. There’s always a catch when it comes to products that are “too good to be true”.

Unfortunately, Chat will not sport end-to-end encryption. This means that your messages could be intercepted by the law, or by hackers.

Not including encryption is not the greatest “look” for a new product. Especially when apps and services like WhatsApp, iMessage, and Signal already include these.

Google Allo was introduced back in 2016 and was another attempt to create a fully-featured messaging platform. Obviously, Allo has not taken off quite as planned, leaving Google to temporarily put the project on hold while Chat development continues.

If I were a betting man, I would venture to say that Google Duo would continue to live on. Meanwhile, Allo will just be thrown into the growing wasteland of Google chat apps.

When is ‘Chat’ coming?

To be frank? We aren’t exactly sure. Chat is expected to be integrated into Messages at some point this year.

Google is hoping that many Android devices will support Chat, but there are no specifics. In an interview with Dieter Bohn of The Verge, Anil Sabharwal from Google states the following:

That may sound like a non-answer, but Sabharwal goes on to state that “this is not a three-to-five year play. Our goal is to get this level of quality messaging to our users on Android within the next couple of years.”

All-in-all, we will just have to sit and wait. And hopefully, the waiting game won’t be too long that we all forget about Chat.