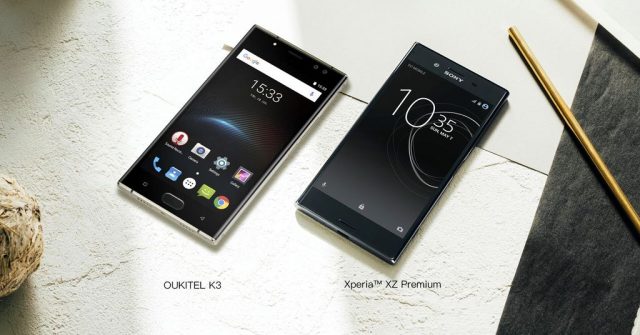 Chinese smartphone brands have had a history of copying the design of iconic smartphone models. For example, you can easily find a Samsung Galaxy S8 clone with measly price attached to it, if you perform a quick search on the Internet.

Sony’s OmniBalance design hasn’t inspired a lot of copy/paste tendencies in Chinese OEMs in the past, but that’s about to change. Oukitel, for example, is offering for pre-order a handset which it wants us to believe, is a worthy alternative for the Sony Xperia XZ Premium.

The Sony Xperia XZ Premium is a high-end device which comes with a 4K display and a Snapdragon 835 processor under the hood. So what about Oukitel’s K3? Does it have a 4K display? No, it doesn’t. How about the Snapdragon? Nope, it’s powered by a MediaTek MT6750T processor instead. So how does Oukitel hope to attract those who are craving a Sony Xperia XZ Premium substitute?

Of course, the Oukitel K3 can’t do that. However, it has a 16-megapixel + 2-megapixel combination serving on the back, as well as on the front, so at least in theory, you should be able to take some sleek selfies.

The handset is on par with the Sony phone when it comes to RAM and storage coming with 4GB of RAM and 64GB of built-in storage. However, it offers only 1920 x 1080 resolution.

All in all, the specs of the Oukitel K3 don’t sound too bad, but it can hardly be called a Xperia XZ Premium competitor give it that it lacks the features that make the Sony flagship great. At best, it can be called a sort of look alike although the K3 is narrower than the Sony phone and features a different sensor arrangement on the back.