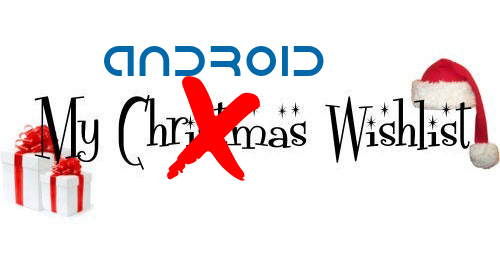 Do you wish stock Android would do a little bit more? Tired of relying on third party developers or manufacturers to add the features you feel should be standard in Android? I could not agree more. As great as Android is, there are some shortcomings in the system. Do not take me the wrong way, I feel it is the greatest mobile operating system in the world, but I think Google should add some of these “no-brainer” features that many manufacturers or developers have added in some way or form into their Android ecosystem.

My first experience with Android was a Samsung Moment, migrating off of a HTC Touch Pro and Windows Mobile. Android 1.5 was rough, but still refreshing and new all at the same time compared to what I was used to. Since that moment four years ago Android has changed enormously. The 2.1/2.2/2.3 updates were the game changing upgrad needed in order to set the device up for world domination under the the 4.x versions of Ice Cream Sandwich, Jelly Bean, and Kit Kat, which now make up an astonishing of 84% of all Android devices. So much for the fragmentation fears everybody was talking about in the early days of Android.

So here we are with the pending release of Android “L” and a slew of new looks and features coming out. As are most avid Android users, I am foaming at the mouth waiting for this new release. While appreciative of the new version coming out, I still hold a resentment with Google over holding out some key features that have not been baked into the Android stock operating system as of yet.

This list is a list of the top five items as compiled by myself and contributors here at AndroidGuys. I would like to think that having these items built into stock Android would give users of all levels a better Android experience.

All in all, as I stated, Android is the greatest operating system out there for mobile devices. This post is not set up as a rant against Google, but more to point out some shortcomings in areas that I think most of us will agree would make our mobile experience better.

So now that you have seen my top five wishlist, tell me, what’s yours?