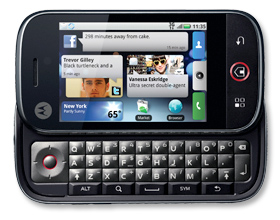 New devices from new Android manufacturers will, in some places, push the Android envelope. Sometimes, they introduce incompatibilities, or change features in ways that not every developer will expect.

The Motorola Cliq is no different.

Specifically, rather than having a trackball on the face of the device, as the on-the-market HTC devices have, the Cliq has a D-pad on the slide-out keyboard. This means developers expecting to have a pointing device in portrait mode on all Android devices will be in for a bit of a shock. And, as with the Samsung Galaxy, the D-pad may result in a different experience from a trackball, certainly from the user’s standpoint, and possibly from the developer’s standpoint (if the D-pad buttons behave differently in terms of an event stream from the trackball).

Motorola has an Android add-on that offers support for AVDs with Cliq-style interaction. Those who sign up for the MOTODEV site can download the add-on, and installation instructions are available separately. Note that MOTODEV staffers have indicated that a newer version of this add-on should be published shortly, as the current edition is based on an older OS build.

There is also an article in the MOTODEV technical library that talks in general terms about dealing with screen rotation and pointing device issues.

I would encourage Android developers to not assume the existence of a pointing device if possible. Use one if it is available, but do not assume every device has one. It is very possible that we will see devices that only offer touchscreens, and at least for the Cliq, it offers only a touchscreen when in portrait mode.

If you do need a pointing device, say so in your manifest via the <uses-configuration> element. Similarly, if you specifically need a trackball — either because you really need it or just are not in position to test with a D-pad — specify that in <uses-configuration>, so your application will not download to incompatible devices.

If you have questions about the Cliq, or run into Cliq-specific issues, Motorola has a set of Android-related boards on MOTODEV. You may get faster, more targeted responses to your questions if you post those there rather than in general Android support areas. If you would like to keep an eye on those boards, one way is to subscribe to them in your feed reader:

As we get closer to when the Cliq will be available from T-Mobile or other carriers, we will hopefully get a better idea of how developers can best get a Cliq for hands-on testing. In the meantime, developers working on Android apps that wish to target the Cliq can apply for membership in the App Accelerator Program. Among other things, that will get you access to a Cliq via the DeviceAnywhere remote testing service.

And, of course, I would be remiss if I failed to mention MOTODEV Studio for Android, which takes the Eclipse/ADT combination and augments it further for Android development. It is free, so Eclipse users may wish to give it a whirl.