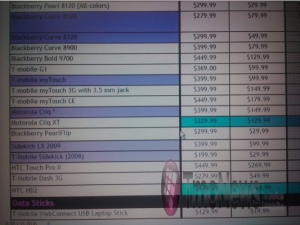 T-Mobile’s next Android handset, the Motorola CLIQ XT is dropping with a great price attached to it.  At $129.99, this marks the lowest debut price point for an Android phone on the nation’s fourth largest carrier.  Yet-to-be-announced, the handset is a touch-only device that was once known as the Zeppelin.  It should be noted that while more expensive on contract than the G1, it’s $40 less if you buy it outright.  The CLIQ XT will be $329 if you decide to purchase one without a service agreement.  In fact, this will be T-Mobile‘s least expensive Android handset if purchased alone.

A quick rundown of specs peg the handset at 528 MHz processor speed, 256MB RAM/512ROM, a megapixel camera w/ autofocus and LED flash, and MOTOBLUR (Android 1.5).  This marks the first handset from Motorola to feature their custom user experience on top of a touch-only handset.  Also noteworthy, the CLIQ XT also features Adobe’s Flash Lite built in, giving the phone an improved web experience over other Android handsets.

If you’re interested in picking up a CLIQ XT, they’re rumored to drop on March 10th.

What do yo guys think of this handset and pricing?  Are you swayed either way now that you know the costs involved?