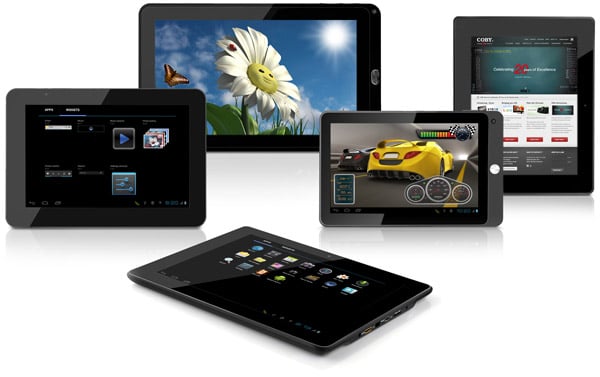 All strange numbered names aside, let’s get into the good stuff: specs. All of the tablets mentioned above will be rocking a 1GHz ARM Cortex A8 processor, 1GB of RAM, 8GB of internal storage on the three largest models, 4GB on the 7-inch and 8-inch devices, MicroSD card expansion, 802.11 b/g/n WiFi, and a camera of unknown megapixels.

Coby has announced that the 7-inch and 9.7-inch tablets will be available this month, which means anytime in the next week. The other three will debut sometime this spring. There’s no official date on any of them, but we expect Coby will make an announcement when the time comes. The full press release can be found below.

So, is anyone impressed with the low-priced ICS tablets that Coby’s cooked up? Anyone think they should just give up on tablets altogether? Sound off in the comments!

[spoiler show=”Show Press Release”]
LAKE SUCCESS, N.Y., March 26, 2012 /PRNewswire/ — Coby Electronics Corporation, the CE leader with products designed to fit every lifestyle, is now shipping its highly-anticipated all-new collection of Android™ 4.0 OS – “Ice Cream Sandwich” – Internet tablets. With its introduction this month of two standout models, the 7″ MID7042-4 and 9.7″ MID9742-8, Coby is ahead of the competition in bringing Internet tablets pre-installed with the latest Android OS to consumers. With a wide variety of unique styles and sizes to choose from, all of the new models are attractively priced at under $300 each.

“Coby is excited to be one of the very first companies to put ICS tablets into the hands of consumers nationwide,” said Jodi Sally, Vice President of Marketing, Coby Electronics. “After such a warm reception in January at CES, where we showcased our new 4.0 models, we’re proud to introduce these sought-after, feature-packed new units to retailers everywhere.”

Coby has achieved significant sales momentum for its lineup of Android-based Internet tablets, reaching #1 brand unit market share in December 2011, according to data from a leading market research firm.

With seamless access to thousands of free apps through the GetJar® app store, Coby’s newest tablets boast must-have features such as:

1GB of RAM for seamless multi-tasking

Expandable storage memory up to 32GB

Coby’s line-up of Android 4.0 ICS tablets will arrive at major retailers across the country starting this month.

Headquartered in Lake Success, New York, Coby Electronics Corporation is a leading supplier of quality consumer electronics products. Since its inception in 1991, Coby has risen through the ranks of the consumer electronics industry. Today, the company is redefining the way consumer electronics products are created, emerging as an industry leader in a challenging economy. With an understanding of its customers’ needs and desires, Coby has developed a strategy of maintaining a competitive cost structure in the industry without compromising the quality of its products. Within the past decade, Coby’s team of inventors, engineers and designers have earned a number of U.S. patents and design awards, with several additional patents pending. For more information, visit Coby Electronics and follow the company on Facebook and Twitter.