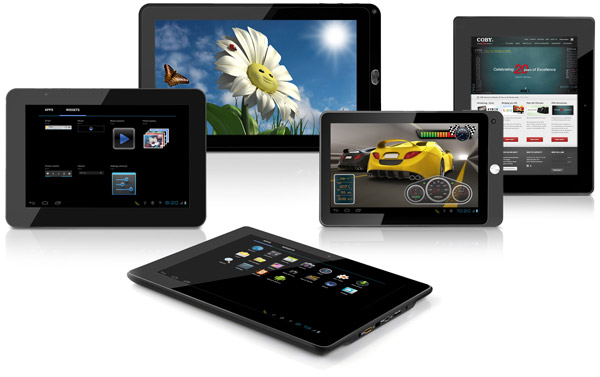 Coby hasn’t exactly had the best track record when it comes to Android devices, but they’re looking to change that at CES early next year. They’ve just announced that they’ll be releasing fiveICS tablets at the tech spectacular in January, all of them featuring a 1GHz ARM Cortex A8 processor (it’s unknown if it’s single- or dual-core), 1GB of RAM, up to 32GB of internal storage, and of course WiFi and 1080p HDMI out. The only real difference among the devices are the screen sizes, which are as follows:

It’s obvious that they’re trying to please everyone with five different screen sizes. The real question is, how impressive will these tablets be (or fail to be)? Only time will tell. The full press release can be found below.

So what do you think? Should Coby get out of the Android tablet game before it’s too late? Sound off in the comments!

[spoiler show=”Show Press Release”]Coby Electronics Announces Debut Collection of Android 4.0 OS Internet Tablets
Lifestyle CE Leader to Be Among the First to Market with
Extensive Lineup of Powerful Ice Cream Sandwich-Operated
Capacitive Touch Units – Q1 2012
Lake Success, New York, December 9, 2011 – Coby Electronics Corporation, the CE leader with products designed to fit every lifestyle, today announced it will ring in the New Year with the exciting launch of its all-new, highly-anticipated collection of Android™ 4.0 OS – “Ice Cream Sandwich”—Internet tablets.  Among the first to market with one of the largest lineups of Ice Cream Sandwich-operated tablets, Coby will debut five standout introductory models, giving consumers a wide variety of unique styles and sizes to choose from – all at incredible prices – starting Q1 2012.  The brand-new Coby Android 4.0 OS tablet collection will be unveiled at the International Consumer Electronics Show, Booth #12027, in the Central Hall of the Las Vegas Convention Center, January 10-13, 2012.
“Coby is thrilled to announce our premiere range of feature-packed Android 4.0-powered Internet tablets that will put the world in consumers’ hands as never before,” said Jodi Sally, Vice President of Marketing, Coby Electronics.  “We also are proud to be among the first companies to make available a wide range of the newest, Ice Cream Sandwich-operated units, helping to further underscore our commitment to meeting the demands of a broad base of consumers with innovative products in the hottest CE categories.”
Following on the success of Coby’s current top-selling Internet tablets, the exciting Android 4.0 assortment will include the 7” MID7042, 8” MID8042 (4:3 aspect ratio), 9” MID9042, 9.7” MID9742 (4:3 aspect ratio),  and 10” MID1042.  With lightning-fast access to thousands of apps and wireless web browsing, the upcoming units all will feature 1GHz ARM Cortex A8 CPU and offer capacitive multi-touch screens, up to 1GB of RAM,  expandable memory up to 32GB, Wi-Fi  and HDMI 1080p output. Overall, Coby has stream-lined its features to address the core applications including: browsing the web, playing games, email and viewing one’s favorite media.
About Coby Electronics Corporation
Headquartered in Lake Success, New York, Coby Electronics Corporation is a leading supplier of quality consumer electronics products.  Since its inception in 1991, Coby has risen through the ranks of the consumer electronics industry.  Today, the company is redefining the way consumer electronics products are created, emerging as an industry leader in a challenging economy. With an understanding of its customers’ needs and desires, Coby has developed a strategy of maintaining a competitive cost structure in the industry without compromising the quality of its products.  Within the past decade, Coby’s team of inventors, engineers and designers have earned a number of U.S. patents and design awards, with several additional patents pending.
For more information, visit Coby Electronics and follow the company on Facebook and Twitter.