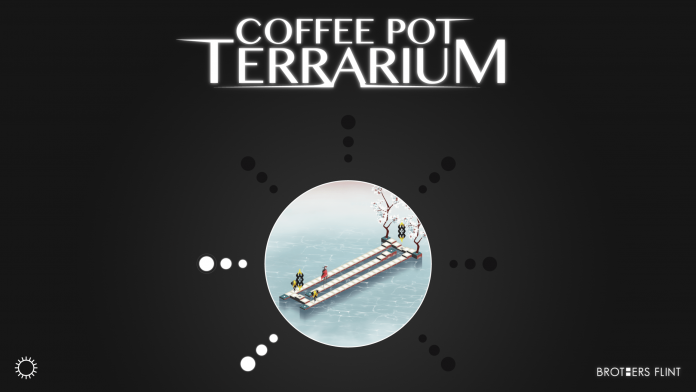 Coffee Pot Terrarium certainly doesn’t sound like the name of a turn-based puzzle game, but that’s exactly what it is. The game is very simple and offers a very zen-like look and feel. The visuals are minimal and stylized, and the music is very relaxing. All of this belies the challenge that the game poses in its levels.

There are no tutorials for this game, instead having you learn how the game works on the fly. Coffee Pot Terrarium is a turn-based game that requires careful planning to eliminate all the enemies on the board. You have a limited movement and attack range, similar to a game like Fire Emblem, and the placement of your character and close observation of the terrain is required to avoid accidental death. Rounds tend to only last a few minutes, but you’ll wind up repeating stages a few times each until you learn the tricks of the level.

There are 21 levels total, across 7 environments that are all very appealing to look at, but the gameplay does get repetitive after a while, but no less difficult. I will say that the game has less replay value due to a lack of incentive, there’s no scoring methods or collectibles that would have compelled me to go back and try the levels again. The game could really use that to push it to the next level.

As it stands now, the game is very light on content for a three dollar game, but what it does have is very polished. The developers have done an excellent job of making the game look and sound good, and the controls are not frustrating to use for the most part, even for on-screen controls. The polish and challenge can make the price worth it if you are looking for a hard game that doesn’t take long to play.

I’d have to say that of the games I’ve played on Android, Coffee Pot Terrarium is one of the nicest, most complete and challenging. The gameplay is smooth and addicting, and there are no microtransactions to be seen. The lack of replayability is disappointing but can be easily fixed by the developers in an update, and is probably the biggest complaint I had in my time playing. I’d recommend this game to anyone looking for a challenge in their Android gaming experience.