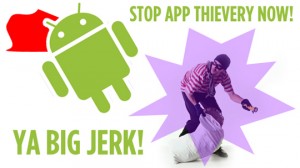 If you’ll remember a few days ago we had (and still have, of course,) a big fat post by the name of “Total JerkDeveloper Steals Beta Game He Was Supposed to be Testing, Publishes to Android Market.” Kind of a mouthful, yes? Well it turns out that the guy guilty of such a crime has a mouth full of more than just one stolen game – he’s got a whole batch. This guy (or guys, or gals, whatever it might be) goes by the name DavinciDevelopers and is stealing APKs for apps left and right, files that are supposed to be testers for developers, publishing them to the Android Marketplace as his own. This is terrible in more ways than one, and we’ve got to stop him.

Agreed. Not being a developer myself, I do not know what the process is to get an app to the Market. But with the open way that Google handles apps, it seems it is going to be a challenge for the rightful owners of the apps that have been taken to reclaim what is theirs. A simple solution, at least in my mind, would be for the actual developers of the stolen apps to simply upload their own version, put a note in the description the advertise like crazy that theirs is the true app. After doing some research on how the Android Market works for devs, it seems that wronged devs cannot even put this process in place. Why? Because when you load an app to the Market, it does not allow any other app to have the same name to avoid duplicates. And once that name is locked it, the feedback that I have gotten is that it is locked in for a good amount of time.

One of the best way to combat these thieves is community awareness, be on the lookout as you browse the market, if you happen to see the name DavinciDevelopers, steer clear!  Then head over to the different Android user forums and post your findings.  Devs work hard, and deserved to have their intellectual property protected.