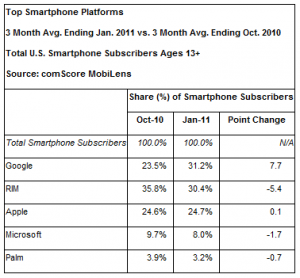 In a shade over two years, Google has gone from zero presence in the mobile OS arena to the top dog.  According to the most recent comScore report, the Android platform now accounts for nearly one in three (31%) smart phones in the United States.

The data collected over the three month period ending in January 2011 shows our beloved OS surpassing RIM and Apple for the first time.  RIM comes in a close second at 30.4 percent market share while Apple follows at 24.7 percent.  Rounding out the top five are Microsoft (8.0 percent) and Palm (3.2 percent).  The comScore figures also tell us that there are now more than 65 million US subscribers using smart phones, up 8 percent from the three month period leading up.

Multi-window support could soon be coming to Android