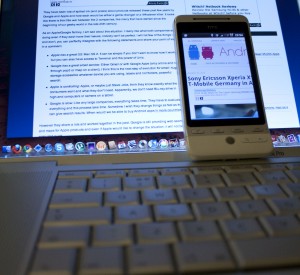 There has been plenty of spilled ink (and pixels) surrounding products released over the past few years by Google and Apple with both puttingÂ Â  out game changers or a iWhatever killers.Â  A perceived rift may be becoming a reality.Â  As both an Apple and Google fanboy, I am saddened by a situation that doesn’t seem as if it will ever get better.

I really like what both companies are doing even if they have their respective issues.Â  Nobody is perfect. I will list a few of the things I like and don’t, you can perfectly disagree with the followingÂ statements and share your point of view in a comment.

However they share a lots and worked together in the past. Google is still providing web search and maps for Apple products and even if Apple would like to change the situation, it will not be easy and quick.

Now, how can someone can be both an Apple and Google fans. The logic would say that if you own a Mac computer, you will own an iPhone. If you compare Android OS and Mac OS X they have tons of similarity:

-Menu bar in OS X and Notification Bar in Android: You’ll get the time here, your network status, battery status… all in the same place.

-Dock and Slider bar: These are very similar concept, you click or drag and you will see icons of all your apps. 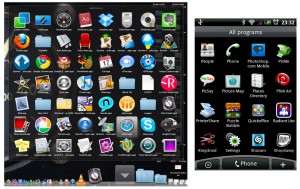 -Terminal/root: On both systems you can use the stock interface as it is or you can customize and improve it. I have Path Finder to replace the Finder on my Mac and a MoDaCo ROM on my HTC Hero.

–WebKit: Safari on OS X and Android browser are based on the same open source engine used to render web pages.

I could add few more but the point is that Mac OS X and Android have a lot more in commun than Mac OS X and the iPhone (or iPad to be trendy). So, for an Apple/Google fanboy the logical choice is to own an Android phone that you will be able to use like you are using you Mac OS X computer. Would you agree?